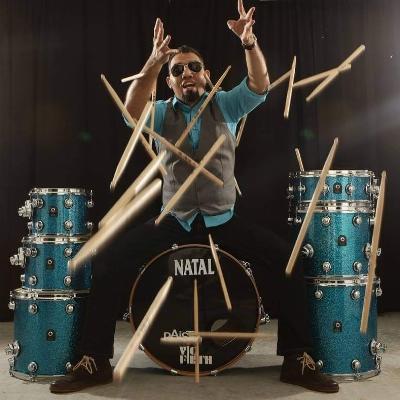 Get to know Luis Hernandez

Drummers are not like other people, and they don't want to be. You have to love them for who they are.Luis Hernandez is a case in point. Most professional musicians start fairly young, or at least during their teen years. But the Puerto Rico-born Hernandez didn't start seriously begin studying music until he was 21. Hernandez quickly learned his art and craft, however, studying drums and percussion with such heavyweights as Freddy Santiago (Chaka Khan, Airto Moreira, Flora Purim, Chick Corea) and the late, great jazz drummer and educator Jim Chapin.Before long, he was touring (as a drum technician) with Ricky Martin, appearing on the Today Show, and much more.Luis decided to join the military and played in the U.S. Army 4th Division Band as well.  After completing his military obligation, he returned to performing as a session musician and live performer and developed his skills as a clinician. In his most recent clinics, he is going well beyond discussing technique to talk about physics, ethics, and professionalism. You don't get that from most clinicians, but Hernandez is not most clinicians. He tries to do well and do right and brings that approach to everything he does. It's easy to love a drummer like that!From studio sessions to HBO T.V. bumpers, Luis covers all bases with excellency and attention to detail. Sign up for lessons today to take your drummer to the next level!

Luis Hernandez teaches at:
South Austin TX
5207 Brodie Ln Suite 220
Sunset Valley, TX 78745
(512) 892-0044
Get Directions More Details
Skip link
With over 150 locations nationwide, Music & Arts is the nation’s leading provider of private music lessons, band and orchestra instrument sales, rentals and repairs. Our remarkable story of growth has everything to do with the countless unshakable relationships we’ve formed with students, parents, music educators and musicians of every stripe in the local communities we serve across the country. Since opening our first store back in 1952, we’ve been owned and operated by the same family, and there’s nothing we do as a company without our values in mind. For whatever you’re doing in music, we’re here to help. We hope you visit our Sunset Valley location soon! Our friendly staff can’t wait to meet you.