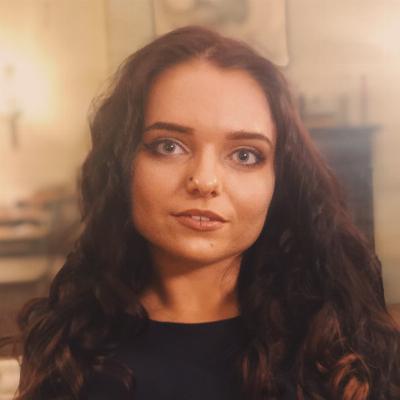 Marie Herrington
Music Teacher, Expert
Location: Hanover, MD
Speaks: English
Instructs: Piano, Voice
Education: Bachelors degree in vocal performance, minor studies in organ from Peabody Institute of the Johns Hopkins University, class of 2020
Teaching Experience: Piano: 7 years classical piano (7), jazz/contemporary piano (3) voice: 8 years (classical, musical theatre, jazz, and contemporary (pop) for a total of 8 years for each) composition: 2 years (classical composition taught as part of the "Junior Bach" program in Baltimore, MD music production: 1 year of lessons to a beginner, taught in private studio and for Taylor Robinson Music Lessons
Teaching Philosphy: With music being one of the eldest and most evolving gifts to humankind, it is enriching in life to get to share my wisdom and years of experience as a performer, a teacher, and originally a music student as well, with as many people as I can, no matter how they like to learn, or what they'd like to learn. My vast background with various styles of music and at least three different instruments allows me to cater my teaching methods to the individual interests of the student as well as possible.
Learn from the best

Get to know Marie Herrington

Marie Herrington is a Baltimore/DC area based soprano and keyboardist who works to culminate all of the hidden beauties of the classical world with the ever-growing world of post-classical/new music; she works to share these beauties by performing the most highly effective and interesting new music, writing her own music, and sharing her teaching expertise with her 29 member teaching studio. Marie has 10+ years of experience as a trained opera singer who has worked with prestigious vocal masters such as Luciano Pavarotti’s vocal coach, Enza Ferrari, and Joan Patenaude-Yarnell of the Curtis Institute. Marie’s most recent opera production (which got cancelled due to the spread of Covid-19), was to perform the role of Prince Orlafsky in Johann Strauss’ production of Die Fledermaus, conducted by Metropolitan Opera conductor, Gregory Buchalter. Marie has also earned a lot of press as a keyboardist being a member of the Baltimore Chapter of the American Guild of Organists, and working as an organist and music director in both the Carolinas and the Maryland/DC area for eight years. Marie’s training has landed her the ability to work with some of her favorite composers, such as Jake Heggie, John Williams, Caroline Shaw, and B. K. Zervigon. Some of Marie’s projects this year include getting to start her own concert series here in North East Baltimore, hosting up and coming local instrumentalists and composers, and later in the year she is looking forward to performing BK Zervigon’s highly influential work detailing the dark tragedies of the heavily polluted and destructed gulf coast, titled: Breach, in New Orleans, Louisiana. To honor the substance of her work, Marie has many awards in fields such as classical and musical theatre singing, such as winning first place in the state-wide National Association of Teachers of Singing (NATS) competition every year from 2012 all the way up to 2016. Marie is also an alumna of the prestige program YoungArts, as well as being the first place winner of the International MasterPlayers voice competition in 2018. Marie had a young start to the world of projecting her voice over an orchestra with her first ever debut with an orchestra being performing with the Durham Symphony of Durham, North Carolina, at age 14. Marie has performed with other orchestras such as the Baltimore Symphony, the Boston Symphony, and the Boston POPS as part of the Tanglewood Institute.