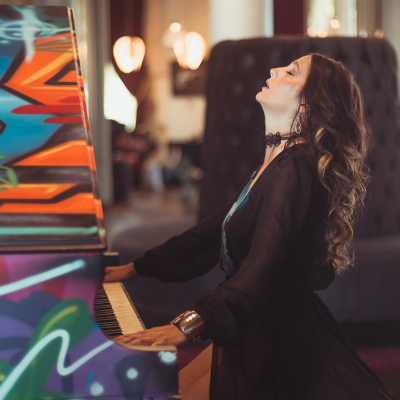 Mariela Suarez
Music Teacher, Master
Location: Garland, TX
Speaks: English, Spanish
Instructs: Piano, Violin
Education: Undergrad work completed at Instituto Superior de Arte (University of Arts of Cuba)
Performance Experience: 34 years
Teaching Experience: 30 years
Teaching Philosophy: As an Educator of the Arts, my philosophy is to teach my students how to personally become the best musician and ultimate version of themselves while instilling a lifelong love of music. I aim to create an effective learning environment in which each student grows musically, personally and professionally.
Learn from the best

Get to know Mariela Suarez

Born on February 6, 1971 in the city of Havana, Cuba. From the age of four she began to appear in TV, radio, documentaries and theater as part of a musical children’s group, “Meñique”. She studied at the music academy specializing in piano and violin. In 1987 she won first place in a national contest for violin students. Mariela graduated with a technical and professional title as instrumentalist and violin professor. In 1989 she was selected to participate the Young World Orchestra as a violinist becoming the first Cuban in history to be accepted for this kind of event.

In 1992 she was part of the prestigious orchestra of the Cabaret Tropicana in Havana, Cuba as keyboard player. Along with Ivan Martinez was musical director of the band “Cuestión Seria”, which won the 1995 Novel Orchestra award in Cuba. In 1997 she was the producer, musical arranger and piano player of the CD, “Amante Solo Yo”, by Dikan and Cuestión Seria. Of which the song “Hice Por Ti”, reached fourth place in the New York Hit Parade of the Latin Beat magazine. During three years she participated as violinist in the symphonic orchestra of Nuevo Leon and was professor of violin in the Instituto Superior de Musica in Monterey, Mexico. In 1999, Mariela moved to the United States and worked as musical director, arranger, piano and violin player/teacher in Dallas. She became a founding member of Havana NRG! in 2002 and is currently Musical Director and Manager of this band. In 2013 she joined Music and Arts as a piano and violin teacher.