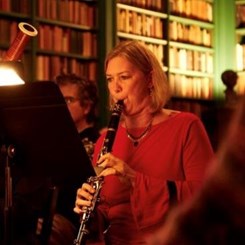 Get to know Marilyn Nije

Marilyn Nije graduated from Indiana University with a Bachelor’s of Music Education, a Master’s degree in Performance from Manhattan School of Music and a Performance Certificate from the Sweelinck Conservatory in Amsterdam, Holland, where she studied with the Principal Clarinetist of the Concertgebouw Orchestra.

She is a founding member of Sinfonietta Ventus, a woodwind octet based in Mexico City and has played Clarinet/Eb Clarinet with the Orquesta Sinfonica de Mineria, also in Mexico City.

Marilyn has extensive recording experience, including 4 recordings with Sinfonietta Ventus. Orchestrally she has recorded under the direction of Carlos Miguel Prieto, Jorge Mester and Teddy Abrams. She has toured extensively in Mexico, Europe, China, Columbia and the United States.

Her husband, Jon Gustely, is Principal Horn with the Louisville Orchestra and her daughter is the Choir Director at Apex Friendship High School. Marilyn loves playing tennis and a dog and cat have recently joined her family!