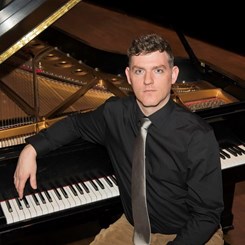 Get to know Michael Bies

Michael Bies is a pianist, composer, and educator who has performed both in solo and collaborative concerts performing music from the 1700's to contemporary classical works as well as rock while filling the position of lead singer and bassist in his college band.  As a composer he has enjoyed performances of his works by many professional ensembles and other great musicians in numerous universities and concerts hall around the country and abroad.  Bies was a featured composer on the Zimmerman's Cafe Chamber Music Series in South Florida.  As an educator, Michael currently teaches Music Appreciation at Midlands Technical College in Columbia, SC and has previously taught music theory and composition at the University of South Carolina, UNCSA in Winston Salem, and Palm Beach Atlantic University in West Palm Beach, FL.  Bies has taught private music lessons for the past 20 years and has a very relaxed and encouraging demeanor while engaged with students and amends his lessons to the individual student depending on their needs and desires.  He holds Masters degrees from the State University of New York at Fredonia in both Piano Performance and Theory/Composition and is currently a Doctoral Candidate in Composition at the University of South Carolina.
Michael Bies teaches at:
Columbia SC
4611 Hard Scrabble Road, Suite 112
Columbia, SC 29229
(803) 462-6030
Get Directions More Details
Skip link