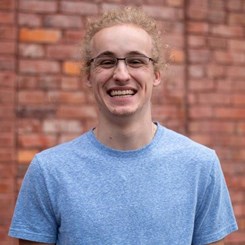 Michael Mills
Music Teacher, Master
Location: Richmond, VA
Speaks: English
Instructs: Piano
Education: BA in Music Composition and Technology along with a Minor in Psychology from Virginia Tech
Performance Experience: Over 8 years experience performing and accompanying as a pianist. Primarily focuses on the performance of contemporary classical music, with world premiers of personal pieces and the works of colleagues in the USA and Europe.
Teaching Experience: Piano - 2 years Composition - 1 year
Teaching Philosophy: I believe one of the most important things I can do as a teacher is provide an environment in which the student's curiosity and passion can flourish. Each person is different in what they like, what they have experience with, what they want to achieve, etc. and therefore I craft my lessons with each of my students differently such their own individuality shine.
Book Now

Get to know Michael Mills

Michael Mills is an accomplished composer whose music has been performed throughout the American Mid-Atlantic region, on public radio, and across Europe. Growing up in a small town in southern West Virginia, he taught himself piano and composition until beginning his undergraduate studies. Michael primarily composes music that addresses topics related to the human experience using a unique compositional voice that mixes contemporary and traditional practices. He ignores the notion of being defined by a genre and enthusiastically composes across an immense range of styles, mediums, and skill levels.​

Aside from composing, Michael is also active as a pianist and musician. He often performs his own music or gives performances of new works by his colleagues, including a number of world premieres. Michael is an avid instructor who finds an immense amount of joy in working with the students in his piano and composition studios. He has began creating a music educational series on the Tom's Creek Publishing YouTube Channel which will cover various musical topics such as rhythm, harmony, history, and more.