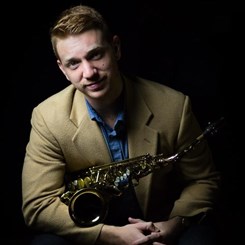 Michael Weiss
Music Teacher, Master
Location: Tucson, AZ
Speaks: English
Instructs: Clarinet, Flute, Saxophone
Education: Bachelor of Music, Saxophone Performance -- University of Arizona 2014
Performance Experience: Michael has performed with dozens of extremely varied groups. The styles have included salsa, jazz, classical, rock, indie, and musical theater. Some notable performances: - Tucson Symphony Orchestra: Music of Pixar - Bernadette Peters at Centennial Hall - Arizona Theatre Company: Music Man and Cabaret
Teaching Experience: Michael created his own private woodwind studio in 2012 and began teaching at Music & Arts in 2014. Many of his students have gone on to win competitions, scholarships, and coveted positions in premiere ensembles.
Teaching Philosophy: Music is a language--if you're reading this, you can learn to play! My lessons are structure around a strong foundation in the classical tradition. They also incorporate theory, ear training, and improvisation. The atmosphere in lessons is always light-hearted, encouraging and supportive. I create a unique lesson plan for every student. We use free notation software as a practice tool and to instill a self-motivated attitude to practice.
Book Now

Get to know Michael Weiss

Michael Weiss is a saxophonist and woodwind specialist originally from Chicago, now working out of Phoenix. He has been playing saxophone for over 20 years and has experience performing on woodwinds in the jazz, classical, salsa and rock idioms.

From a young age Michael became fascinated by improvised music, which has augmented his classical studies since middle school. In high school, he earned opportunities to play with such premier student groups as the IMEA and Midwest Young Artists big bands. He has studied with jazz saxophonists Greg Fishman, Ben Schachter and Brice Winston, and performed with jazz greats Michael Davis, Rufus Reid, and Bobby Shew.

Classical saxophone has always been the foundation of his studies. While exploring solo and chamber repertoire, he has also had the opportunity to premiere ensemble pieces like David Maslanka’s 9th Symphony and the privilege to perform with the Tucson Symphony Orchestra. Michael has also toured all over the world, performing in London, Cardiff, Peru, Mexico, and China, as well as all across the United States.

Michael is an experienced woodwind doubler. During his work on dozens of musical productions, he has performed on soprano, alto, tenor, baritone, and bass saxophones; flute, alto flute, and piccolo; and Bb and bass clarinets.

Perhaps his most rewarding project has been his collaboration with percussionist Elizabeth Soflin in the Weiss/Soflin Duo. Together, they perform all across Arizona, commission new works regularly, and arrange existing works for this unique ensemble. The duo most recently commissioned Easter In Bingham by Stuart Saunders Smith and Profiled From Atmospheres by Matthew Burtner. The works were showcased at the Oh My Ears festival in February 2019.

Michael currently works out of Phoenix, performing and recording locally with various bands and pit orchestras. Michael earned his saxophone performance degree at the University of Arizona under the instruction of Dr. Kelland Thomas.