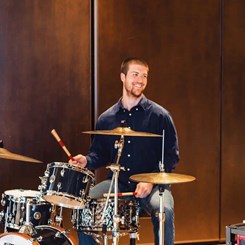 Get to know Miles Lieder

Miles Lieder is a Frederick, MD based professional drummer and drum instructor. Miles began taking drum lessons from the eager age of six in 1998 and hasn’t put down the sticks since.

Because of his lengthy background with a variety of drum instructors, Miles was primed to start teaching his own drum lessons privately at the age of fourteen. He believes in setting a firm foundation with his students, and provides his own customized lesson plans to individually cater to each student. Some of these foundations and techniques include rudiments, reading sheet music, timekeeping and “playing to the song”.

Miles Lieder began gaining professional gigging experience during his high school senior year in 2010 with a fusion act, “FLD”. With this band, he had the opportunity to play on live television four times for Washington, DC news networks. “FLD” also had six residency slots at The Strathmore Mansion and opened for Ramsey Lewis at the famous Strathmore Hall. Miles later began touring around the east coast of the United States in 2013 with a rock/reggae band, “Dale and the ZDubs”. In these years, he had the opportunity to open for acts like Magic!, OAR, Badfish, and The Pietasters in venues like the 9:30 Club, The Norva, The Fillmore Silver Spring, The Brooklyn Bowl, Knitting Factory, and many more.