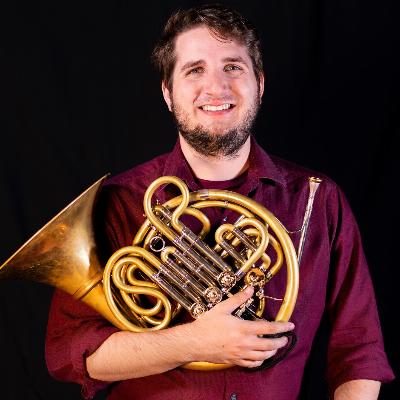 Get to know Mitchell Hansen

Mitchell Hansen is a Horn Player currently living in Las Vegas. Born in Chicago IL, Mitchell Hansen has always been inspired by the wonderful horns of the Chicago Symphony.  He grew up in Phoenix, Arizona, where he started on horn at the age of 11.  In Phoenix, he was a member of the Phoenix Youth Symphony, ProMusica Arizona, and a regular in the Northwest Regional High School Orchestra.

At age 16, Mitchell lived in Pécs, Hungary, where he became fluent in Hungarian and Hungarian culture.  He then moved to Portland, Oregon to finish high school.

After Graduation, Mitchell felt a calling from his birthplace and decided to give Chicago a try.  He attended the Chicago College of Performing Arts to receive his Master's degree in Music Performance in French Horn, where he studied under Greg Flint, Jon Boen, and David Griffin.

Mitchell gave a Collaboration Recital featuring 5 different Vocalists with French Horn.  One of his favorite types of music is Horn, Voice and piano trios.  He was recently praised by Ted Nash, and Chris Crenshaw for his ability to work exceptionally well with in Chamber Music Settings.

Mitchell Hansen's passion for Chamber music has led him to join the high profile Twin Peaks Brass. As the horn player in the brass quintet Twin Peaks Brass, Mitchell arranges music and is featured on all the recordings which can be found on their website, twinpeaksbrass.com, Spotify, and iTunes.

Mitchell is also a member of The Red Rock Wind Quintet. This group performs regularly around Las Vegas. They perform new works, and have collaborated with new Composers. While also performing outreach to different schools around Las Vegas. They bring music to the schools that don't always get to experience music at this high level.

Recently, Mitchell was invited to audition for the role of Principal Horn with the New York Philharmonic, and the Chicago Symphony. Mitchell also regularly performs with the Las Vegas Philharmonic, and the Nevada Ballet.  He is the Principal Horn for the Nevada Chamber Orchestra.  Mitchell most recently was the runner-up for the Northwest Horn Symposium's Low Excerpt competition.

Mitchell currently performs around Las Vegas and when he isn't performing he is teaching excellence to his students. One of his passions is teaching privately. His private students have achieved regular success, including making all-state consistently. Currently, Mitchell is receiving his DMA in Horn Performance from UNLV.