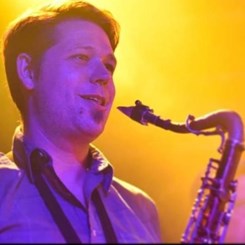 Nathaniel Koch
Music Teacher, Master
Location: Richmond, VA
Speaks: English
Instructs: Clarinet, Flute, Music Theory, Piano, Saxophone
Education: BA in Saxophone Performance
Performance Experience: Toured nationally and internationally with The Toasters (NYC), Eastern Standard Time (DC), and as the backing band for Italy's Mr. TBone (Torino). Performed locally here in RVA with Murphy's Kids for 15 years and helped organize our Have a Happy Skalidays benefit for 9 years.
Teaching Experience: 15 years of experience teaching private and group lessons
Teaching Philosophy: I believe in a measured, disciplined, goal oriented approach. I remember being young and having no idea what or how to practice. So from my beginners to my advanced students I stress the process. I want my students to be methodical and mindful in their studies, listening to themselves and the music they wish to emulate or create. I also focus early on good tone because if you don't like the way you sound you'll never practice and being a well rounded musician starts with individual practice.
Book Now

Get to know Nathaniel Koch

As a Richmond VA native, I began performing locally at a young age. After developing a love for music and a taste for performance I decided to persue music as a career. I enrolled in Longwood University and under the direction of Dr. Charles Kinzer I honed my technique and deepened my understanding and love for music. While in college, I studied different methods of saxophone performance but eventually realized I wanted to be a well rounded musician that is comfortable in any setting. Be it sitting in a 25 piece big band or occupying a chair in a symphony I wanted to be prepared. I pursued my degree in saxophone while simultaneously performing locally in Farmville VA with a small jazz group consisting of local musicians and fellow students and traveling up and down the east coast with the band I had joined back in Richond.

After graduating, I returned to Richmond and continued to perform locally with various groups and eventually I was hired by international touring group The Toasters. I spent time touring extensively in North America and even played shows in Central and South America.

Now I reside in Richmond with my wife Mary and we are having our first child. I am excited to bring all my experience to this new teaching platform. Through my study and travel I've gained insights into playing, performance, technique, emotion, improvisation, networking, band management, and much more. I double on flute and clarinet and also play piano. I also own all of these instruments and can teach all levels from beginner to experienced. I put an emphasis on what and how to practice toy lessons are goal oriented. All I ask is that you put in the effort during personal practice time. So if you're looking to learn how to play an instrument or just gain a deeper appreciation of music I'd love to help out.

See you in the practice room,