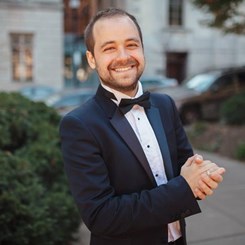 Get to know Nikita Borisevich

Award-winning Russian violinist Nikita Borisevich is known for the precocious depth and sensitivity in his playing and utterly finessed technique. Since his debut with the Perm Opera Symphony Orchestra at the age of twelve, he performs internationally in Germany, Czech Republic, Austria, Latvia, Russia, Spain and across the United States on renowned stages such as the Kennedy Center (Washington D.C.), the Great Hall of the Moscow Conservatory (Russia), Manuel de Falla Auditorium (Granada, Spain) and Shriver Hall (Baltimore).

​In the 2017-2018 season, following an invitation by the multiple Grammy Award winner cellist Zuill Bailey, Nikita made his debut as a guest artist for the Sitka Summer Music Festival in Sitka, Alaska, Northwest Bach Festival in Spokane, Washington and Alaska Airlines Concert Series in Anchorage, Alaska.

In addition to performing, Nikita has served on the chamber music faculty at the Baltimore International Piano Festival and will perform recitals across the East Coast along with his pianist wife, Margarita Loukachkina.

Mr. Borisevich's past engagements includ artist residency at the El Paso Pro Musica Festival, performance of Bach's Double Concerto with Soloists of the Heifetz Institute in Maryland and Virginia and chamber music recitals in Baltimore and Washington DC.

Nikita has performed with the Ural Philharmonic, Perm Opera Symphony and Volgograd Academic orchestras, playing works of Paganini, Ravel and Waxman. Most recently, he performed the Sibelius Violin Concerto in the Friedberg Hall of the Peabody Conservatory under the baton of Jordan Smith.

​As an active chamber musician, Nikita won numerous chamber music competitions, among these are the Yellow Springs Chamber Music Competition (Ohio), the Coleman Chamber Ensemble Competition (Los Angeles, CA), and the Chesapeake International Chamber Music Competition (Maryland). Nikita has performed recitals throughout the US and abroad in various chamber groups. He has collaborated with Grammy Award Winner Zuill Bailey, Concertmaster of Dallas Symphony Orchestra Alexander Kerr, founding member of the Brentano String Quartet Michael Kannen, Maria Lambros (Peabody Conservatory), Monique Duphil (Oberlin and Hong Kong Conservatory), Navah Perlman and Martin Sher among others. In 2011, Nikita won the Grand Prix in the International Chamber Music Competition (trio division) in St. Petersburg, Russia and made his debut at the Moscow Philharmonic Society. As a member of a piano trio, he made his debut at the Kennedy Center, Therace Theatre in 2013, performed in the Washington College Concert Series (MD), the Friends of Chamber Music Concert Series (PA), and the Academy Arts Museum Concert Series (MD).

​Nikita was born into a musical family and started playing the violin at the young age of five, with his father being his first teacher. He received his Bachelor's and Master's degrees from the legendary Moscow Conservatory, with Maya Glezarova and Marina Keselman, and completed graduate diplomas as well as a second Master of Music Degree at the Peabody Conservatory of Music in Baltimore with renown violinists and pedagogues Victor Danchenko and Herbert Greenberg.