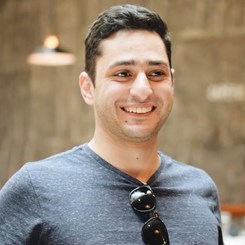 Get to know Petros Karapetyan

Orchestra in 2019. Petros began his violin studies at the age of 6 in his native country and

attended the Tchaikowsky Specialized Music School until age 11. After moving to

Aguascalientes, Mexico in 2004, he continued his musical studies with his mother, later

becoming her official student at the Universidad Autónoma de Aguascalientes in 2011. Aside

from his undergraduate studies in music, Petros was also pursuing a degree in International

Business at the Universidad Panamericana.

After deciding to continue his studies in the United States, Petros was accepted at the Eastman

School of Music in the studio of Mikhail Kopelman in the class of 2017. While at Eastman,

Intensive and Honors Chamber Music Programs. Petros graduated from the Eastman School with

a Performance Certificate in 2017 as well as a B.A. in Business from the Barry Florescue

Undergraduate Business Program at the University of Rochester. Continuing his studies, Petros

joined the Shepherd School of Music at Rice University in the studio of Kathleen Winkler,

earning his Master of Music degree in 2019.

Petros has been a fellow at festivals around the world, including the Tanglewood Music Center,

played with the Houston Symphony, Aguascalientes Symphony Orchestra, Symphoria! in

Syracuse and the IRIS orchestra in Memphis, Tennessee. Aside from music, Petros enjoys

hiking, soccer, cooking, reading and has a German Shepherd dog.