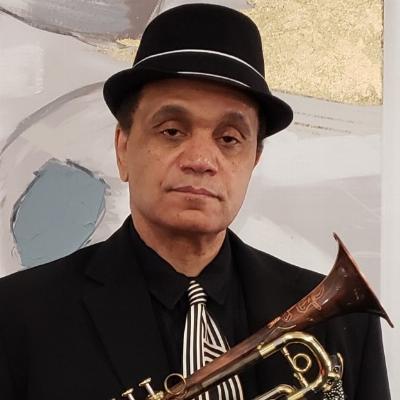 Get to know Randy Skinner

As an accomplished trumpeter, Randy began to play brass instruments in grade six while enrolled in the Virginia Public Education system. Throughout his childhood years he listened to and imitated a wide array of musicians from Kool and the Gang, Earth, Wind, and Fire to Freddie Hubbard, Lee Morgan, and Wynton Marsalis. Randy expanded his music repertoire during his high school years and began to play R&B professionally with a local band, The Mighty Impersonators. He also played professionally on military bases and in clubs in the Virginia Beach area.
Upon graduation from high school, Randy accepted a music scholarship to attend Shaw University in Raleigh, North Carolina. His college senior recital showcased his talent and skills on the French horn and trumpet and included Strauss Horn Concerto 1 and Mozart Concertos for horn. Randy’s training in music continued when he enrolled at the Berklee College of Music in Boston. While in Boston he participated in and facilitated the Tanglewood Summer Music Workshops for inner city youths. These workshops were sponsored by WGBH, The New England Conservatory, The Wang Center for the Performing Arts, and The Boston Symphony Orchestra. In addition to performing nightly with R&B and jazz bands, Randy became a music educator in the Boston School System where he was instrumental in developing programs for his students and conducting seminars which included lectures and demonstrations by professionals and personal friends, Wynton Marsalis, Christian McBride, and Rumus Barrett. He also befriended his all-time influence, Freddie Hubbard. The acquaintance developed into a friendship that continues today.A renowned musician whose professional experience has run the gamut of styles from gospel (12th Baptist Brass Ensemble), to popular R& B (The Chi-lites, Jean Karn, Norman Connor), from soul (Sam&Dave), to jazz (Rumus Barrett, Eddie Harris, Freddie Hubbard,), from funk (George Clinton and the P-Funk All-Stars) to dance (Impulse Dance Company), Randy T. Skinner has been praised by many respected musicians. Randy is now based out of Atlanta, Georgia, where he performs with numerous bands in the Southeast area including his own group, Skin-Tones in Pursuit. Randy has emerged as an outstanding trumpeter with a captivating style, accentuated by an eclectic fusion of jazz, blues, and funk.
Randy Skinner teaches at:
Johns Creek GA
3630 Peachtree Pkwy Suite 505
Suwanee, GA 30024
(770) 495-5877
Get Directions More Details
Alpharetta GA
631 N Main St Suite 107
Alpharetta, GA 30009
(770) 360-9585
Get Directions More Details
Skip link