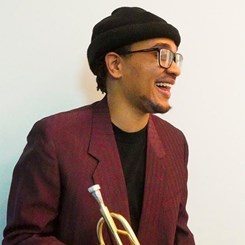 Get to know Ryan Easter

Born and raised in Richmond, Virginia, Ryan Easter is a seasoned performer, composer, arranger, and educator. He earned his B.A. in Music Performance in 2014 from The Berklee College of Music after studying with the likes of Darren Barrett, Tiger Okoshi, Charles Lewis, Tia Fuller, and more; but his start began with Richmond's own Rex Richardson, Tony Garcia, and Elmer Smith.

Having performed and toured throughout the country, Ryan has shared the stage with a wide range of artists, including Talib Kweli, Donald Harrison, Giorgi Mikadze, John Daversa, EPMD, Pressure Fit, No BS! Brass Band, Brunswick, Caliph, Tiger Speak, Iman Omari, and others. In addition to performing as a trumpeter, he has arranged and composed for both Tiger Speak and The Trap Music Orchestra, featured in publications including XXL, The Boston Globe, and The Huffington Post. Ryan brings all of his experiences to his approach in mentoring young musicians, pushing and preparing them to meet and exceed their goals and navigate in the evolving world of music.