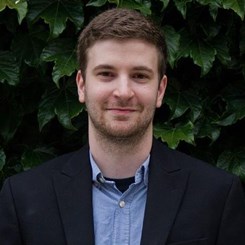 Get to know Sean McFarland

Sean McFarland (b. 1991) is a guitarist, violinist, and composer from Baltimore, MD. As a guitarist, Sean’s work is exceedingly broad. While his primary focus is on contemporary chamber works, on any given week Sean can be found performing African Praise and Worship, free improvisation, and an assortment of rock music. In the popular music realm, Sean is the lead guitarist in the bands June Pastel and Euclid C. Finder, whose work has been featured on official Spotify playlists. He has shared stages and basements with legendary acts like Pinegrove, ALVVAYS, Alex G, and JPEGMAFIA. This year, Sean will release his first solo record for electric guitar, titled 1006 and Resonance. In his writing, Sean often creates music relating to the human condition. Through these topics, he seeks to broaden the capabilities of music as a representational art. Often subdued and understated, Sean’s music relies immensely on detailed listening. He has studied under a wide variety of composers including Stuart Saunders Smith, Linda Dusman, Roger Reynolds, Ian Power,and Michael Hersch. Last year, Sean completed his Master of Music in Music Composition at the Peabody Conservatory, where he won the Gustav Klemm Award for his work. Most recently, he completed Bushwick Sonnet for singer-soloist and vocal ensemble. As an instructor of guitar, violin, and other instruments, Sean seeks to provide his students with a 21st century education in music to enable them for the world of music on a professional level. Sean's students have been accepted to top tier music programs like Bard College, University of the Arts, and Berklee College of Music. Among a variety of teaching posts, Sean is the head music teacher at Fusion Academy in Columbia, where he gives 1-on-1 instruction on instruments and music software to neurodivergent teens.
Sean McFarland teaches at:
Ellicott City MD
9210 Baltimore National Pike Suite W-7
Ellicott City, MD 21042
(410) 461-1844
Get Directions More Details
Bel Air MD
5-N Bel Air S Pkwy Suite 1415
Bel Air, MD 21015
(410) 569-3500
Get Directions More Details
Skip link