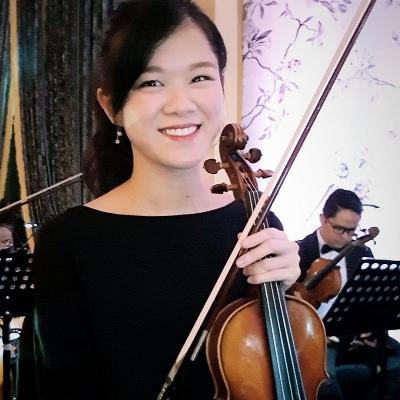 Stephanie Wong
Music Teacher, Master
Location: Amarillo, TX
Speaks: English, Chinese
Instructs: Piano, Viola, Violin
Education: Bachelors in Music from UCSI University Masters in Violin Music Performance from WTAMU University Teaching Certification from PACE in WTAMU University (currently pursuing)
Performance Experience: 7 years
Teaching Experience: 10 years
Teaching Philosophy: My main goal in teaching is to get the students to learn how to play with the right posture, relaxed body, clarity and eventually technical and musicality in their music playing. I would also like to inspire my students that music is interesting and fun to learn.
Book Now

Get to know Stephanie Wong

Stephanie Wong was born in Johor Bahru, Malaysia. She started learning music at a very young age. She learned piano from her mother at the age of 4 and started violin at the age of 7. Throughout her childhood, Stephanie would be enrolled in taking practical exams for piano and violin with the ABRSM music exam board where she achieved all 8 grades of piano and violin exams. What sparked Stephanie to be in the music career was when she was 17, her mother pushed her to audition for the Young Malaysians Go Classic (YMGC) program to perform film music. It was an orchestra lead by conductor, Kevin Field, who was back then the resident conductor of Malaysian Philharmonic Orchestra (MPO). Initially, she was not interested to join the program but as she was the only instrumentalist chosen in her state to participate in this program, her mother thought it was a great opportunity and managed to convince her to take part in it. This program was the first orchestra she has ever been in and she was amazed by the combination of tones, timbres, textures, etc. She heard and saw how many instruments could come together to create dramatic and wonderful music. It also gave her the opportunity to challenge herself and find many other ways the violin could be played. She found herself enjoying it more and more. When she finished this program, she decided that she wanted to have music as her career and eventually take over her mother's music shop in Malaysia.

After Stephanie was done in High School, she studied music in UCSI University in Malaysia. The students showed competitive skills and she was greatly influenced by her peers. Practicing became a norm for her and she would sometimes practice up to 6 hours a day. With hard work and determination, she improved greatly and started playing the pieces she dreamed of playing but thought she could never play. She initially was a double major in piano and violin but found the workload too much. Due to what inspired her to pursue music, she chose the violin and over the span of 4 years in her studies, she managed to be the second violin principal for a year and the co-concertmaster for a year in the UCSI Symphony Orchestra. Stephanie also managed to get into the Malaysian Philharmonic Youth Orchestra (MPYO) after her second attempt was successful. This was a big deal to her because MPYO Orchestra known for having competent young musicians join to improve themselves. With the MPYO Orchestra, Stephanie has toured with them to Singapore and Hong Kong for collaborated performances. Moreover, she also worked hard to gain her Diploma in Piano Performance (ATCL) under the Trinity Exam Board. During her last semester of studying in UCSI, she was offered a scholarship to study Masters in Music Performance in West Texas A&M University (WTAMU). She accepted the offer and flew to United States on the 1st of January, 2019.

While in WTAMU, she was appointed as the co-concertmaster for 3 semesters and the concertmaster for 2 semesters in the WTAMU Symphony Orchestra. She studied under Evgeny Zvonnikov and has greatly improved her technical, musical skills and professionalism under him. She had the opportunity to performed with the Amarillo Symphony Orchestra and Amarillo Chamber Orchestra while she was here. Currently, she is an orchestra director at several elementary schools, an instructor for the Amarillo Youth Symphony Orchestra, and teaches piano and violin (main focus) at Music & Arts.  She is also pursuing her Teaching Certification for Music under the PACE program in WTAMU.

Stephanie Wong teaches at:
Amarillo TX
3300 S Soncy Rd Suite 200
Amarillo, TX 79121
(806) 352-4412
Get Directions More Details
Skip link
With over 150 locations nationwide, Music & Arts is the nation’s leading provider of private music lessons, band and orchestra instrument sales, rentals and repairs. Our remarkable story of growth has everything to do with the countless unshakable relationships we’ve formed with students, parents, music educators and musicians of every stripe in the local communities we serve across the country. Since opening our first store back in 1952, we’ve been owned and operated by the same family, and there’s nothing we do as a company without our values in mind. For whatever you’re doing in music, we’re here to help. We hope you visit our Amarillo location soon! Our friendly staff can’t wait to meet you.