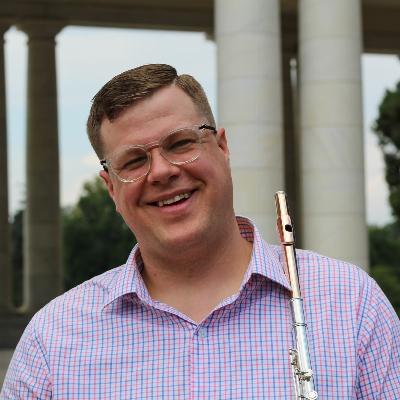 Steve
Music Teacher, Professional
Location: Littleton, CO
Speaks: English
Instructs: Clarinet, Flute, Saxophone
Education: Bachelors of Music
Performance Experience: Stephen has been performing with bands and orchestras throughout the United States for the past 20 years.
Teaching Experience: Stephen has been teaching for 1 year
Teaching Philosophy: Stephen's philiosophy is the belief that with the right environment and circumstances, anyone can learn to play an instrument.
Book Now

Get to know Steve

Stephen Bowden is currently pursuing a Bachelor of Music Performance at Metropolitan State University of Denver under the instruction of Dr. Patricia Surman and is on track to graduate in Fall of 2022. His future education goals are to obtain a Masters in Music and a Doctor of Musical Arts. Originally from Ocean City, Maryland, Stephen has spent his education thus far becoming as well rounded a musician as possible. Other instruments that he plays include piccolo, clarinet, alto saxophone and piano. Prior to enrollment at MSU Denver, Stephen had studied with Vanita Hall-Jones, Dr. Leroy Barton, Michael Williams, and Dr. Melinda Wade-English.

Stephen regularly performs in flute choirs, master classes, wind ensembles, orchestras, and chamber groups associated with MSU Denver and across the US. Stephen has performed at the Kennedy Center with the District of Columbia Different Drummers, performing Carmina Burana in 2008.

Stephen has been awarded Dean’s Excellence for every semester attended for maintaining a 3.5 grade point average or higher since his fall semester of freshman year.

His hobbies include baking, gaming, baseball, and traveling.

Steve teaches at:
Littleton CO
7421 W Bowles Ave Suite 12
Littleton, CO 80123
(303) 973-0977
Get Directions More Details
Skip link
With over 150 locations nationwide, Music & Arts is the nation’s leading provider of private music lessons, band and orchestra instrument sales, rentals and repairs. Our remarkable story of growth has everything to do with the countless unshakable relationships we’ve formed with students, parents, music educators and musicians of every stripe in the local communities we serve across the country. Since opening our first store back in 1952, we’ve been owned and operated by the same family, and there’s nothing we do as a company without our values in mind. For whatever you’re doing in music, we’re here to help. We hope you visit our Littleton location soon! Our friendly staff can’t wait to meet you.