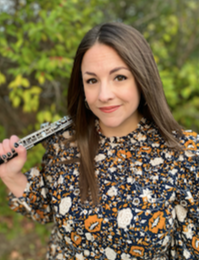 Get to know Suzanne Jennison

Suzanne Jennison is a professional oboist and music educator based in Columbus, Ohio.

An active freelance performer, Suzanne Jennison has performed with many esteemed ensembles in the Central Ohio area. In addition to playing English horn as a member of the New Albany Symphony Orchestra, she has also performed with the Central Ohio Symphony, the Newark-Granville Symphony Orchestra, and Opera Project Columbus. Most notably, Suzanne Jennison served as Principal Oboe for the Opera Project Columbus production of "Die Fledermaus" in January of 2020.

Her commitment to music has also enabled her to study and perform around the world, attending summer music festivals in Sweden and Austria. Her international expeditions include performances in Austria at St. Stephen’s Cathedral in Vienna, as well as Esterházy Palace and the Church of Joseph Haydn in Eisenstadt.

In addition to her love of performing, Suzanne is an enthusiastic music educator. Since completing her terminal degree in May of 2020, Suzanne has cultivated a substantial studio of students while serving as the Oboe Instructor at Music and Arts locations in Worthington, Reynoldsburg, and Hilliard, Ohio. Beginning her own oboe studies at the early age of nine, she firmly believes that musical study can encourage and motivate even the youngest minds to strive for excellence. She is devoted to inspiring confidence and passion in her students and colleagues, so that they are driven to reach their fullest potential.

Suzanne has a passion for twentieth century and contemporary music, and strives to be an advocate for increasing the visibility of diverse composers and artists that are underrepresented in the musical canon —values which she instills in her students and also demonstrates in her own performances. Such performances include participating in a recording session of works exclusively written by women in March of 2019, and her recent recitals have included electronic works such as Phillip Bimstein’s "Half-Moon Over Checkerboard Mesa" (1997), as well as jazz-inspired works such as Alec Wilder’s "Piece for Oboe and Improvisatory Percussion" (1958), Bill Douglas’s “Quartet for Flute, Oboe, Bassoon, and Piano” (2009), and Keith Jarrett’s “Adagio for Oboe and String Orchestra” (1994).