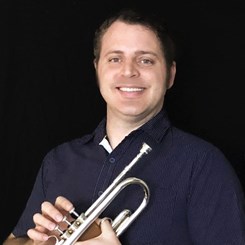 Tyler Windle
Music Teacher, Master
Location: Houston, TX
Speaks: English
Instructs: Baritone, French Horn, Trombone, Trumpet, Tuba
Education: Teaching Certificate K-12 and Music Education specialty.
Performance Experience: Performed in several genres over the past two decades; most notably a Jazz tour with the Curt Wilson big band in Italy and France as well as with the Houston Symphony. Currently I freelance and play in the TMCO orchestra.
Teaching Experience: 10 years
Teaching Philosophy: Simply - music is for all who seek it. It is the oldest language; everyone and anyone can speak it.
Book Now

Get to know Tyler Windle

Similar to many of his students, Tyler started Band in Middle School playing the Tenor Trombone. After graduation he knew he had to stay with music, earning his Bacherlors in Music Education from the University of Houston. In High School Tyler was awarded the Eagle Scout rank, All-State swim team, All-State orchestra, and was second place in the United States Air Force Contercto Competition. Later on he went to play with several notable groups both locally and internationally. Tyler has played with the Houston Symphony, the Curt Wilson Big Band, the Woody Witt Big Band, Rogues Among Us, the Texas Medical Center Orchestra, and has played Trumpet and Trombone on several recordings as a Studio Musician.

Beyond playing brass professionally for the past decade, Tyler also has produced an electronic music CD, made remixes for local artists, DJ'ed semi professionally, taught swimming and math, and is an expert barista.

Tyler continues to play in local ensembles and has recorded several virtual concert since the pandemic. If he is not recording he enjoys making resources for his students and values being a teacher as much as he enjoys playing professionally.

He is proficient on all brass instruments primarily as a Trombonist, but has played Trumpet, Tuba, and Euphonium professionally for the past 10 years both in concert and in studio.