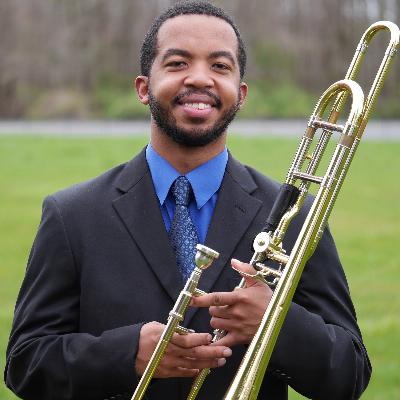 Get to know Tyrell Butler

Tyrell Butler has moved around the east coast, going from Philadelphia to North Carolina and finally relocating to Williamstown, NJ, where he currently resides with his family. Tyrell graduated from Williamstown High School in 2012, where he was a member of the Braves Marching Unit four years, including Top Three Atlantic Coast Championship From 2008 to 2010, US Bands Northern States Champions from 2009 to 2010 and US Bands National Championship in 2010 for Group II. In 2012 Tyrell started his Drum & Bugle Corps Career as a baritone for the Bushwackers Drum & Bugle Corps of Harrison, NJ. In 2015, Tyrell had the pleasure of marching with The Reading Buccaneers Drum & Bugle Corps of Reading, PA, as a third baritone as the corps won a World Championship in Drum Corps Associates with a score of 97.58. An honor he has gone on to capture two more times in 2017, which was the 60th anniversary of the corps and in 2019. Tyrell Performed as a member as the Regional-All Star Trombone Choir at the University of Delaware Trombone Day with students from Indiana University of Pennsylvania, West Chester University, Penn State University, Shepherd University, George Mason University and The University of Delaware. In 2013 Tyrell became a member of the Sigma Kappa Chapter of Phi Mu Alpha Sinfonia Fraternity of America Inc. in 2017. Tyrell graduated from Delaware State University with a degree in Music Education. Currently, Tyrell recently graduated from Temple University with his Mastes of Music education plus certification degree this summer.
Tyrell Butler teaches at:
Lewes DE
17903 Willie Rd
Lewes, DE 19958
(302) 645-7810
Get Directions More Details
Skip link