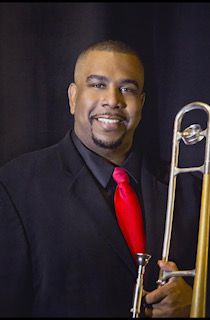 Get to know Ulrican Williams

Ulrican Williams is a native of Houston, TX where he honed in on his musical talents while attending the nationally recognized High School for the Performing and Visual Arts c/o '97.

Ulrican is a very accomplished educated musician and artist. In 2003 he graduated Texas A&M University-Kingsville where he received his bachelor's in music; also acquired his Master's in Jazz Studies from the University of Texas at Austin a graduate of c/o ’07.

His musical journey had taken him on some very noteworthy adventures to the likes of playing in show bands for Celebrity Cruises and Norwegian Cruise Line (2004-2007) to backing up celebrities such as Mark Preston from the Lettermen, Comedian Louis Johnson, and Actress Rosie O’Donnell…travels that took him throughout the Caribbean and Western Europe.

Ulrican is a member of national and international competition winner “JazzBonez” who released their debut album “Watch IT!” in March of 2014.

Ulrican is also an active musician within the Austin music scene as well as around the state of Texas and beyond.

Ulrican has been providing private lessons as an instructor in the Austin area since 2007 and spent 10 years with the Lake Travis Independent School District, and also taught within the Eanes, Hutto, and currently with Pflugerville, Kyle, and San Marcos ISD’s.