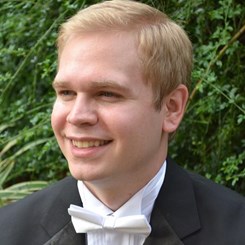 Get to know Vaughn Cardona

Dr. Vaughn Cardona is a studio instructor for Music & Arts teaching private lessons for woodwind and voice students of all ages and skill levels. Before joining the Music & Arts teaching team, he was an Assistant Professor of Music at Bryan College where he directed the Bryan College Wind Ensemble, Bryan College Community Orchestra, and served as music director and conductor for Bryan's Hilltop Players and Bryan Opera Theatre. He also taught courses relating to instrumental performance, conducting, and music history. Other positions include being an instructor for Walters State Community College, where he taught music courses and conducted the Encore Community Chorale. Before entering graduate school, he worked as the Director of Bands and Chorus Director for the Clay County School System in Celina, Tennessee, where he taught K-12 general music and directed instrumental and vocal ensembles. In addition to teaching, he has also served multiple terms as the Music Production Coordinator for the Tennessee Governor’s School for the Arts, and is an active member of the East Tennessee School Band and Orchestra Association (ETSBOA), and serves as a guest clinician and adjudicator for conducting and woodwind performance.

Holding a Doctor of Musical Arts degree in Orchestral Conducting from Louisiana State University, Vaughn studied conducting and orchestral repertoire with Maestro Carlos Riazuelo, as well as completing secondary studies in Musicology. Before attending LSU, he completed a Master of Music degree in orchestral conducting at Colorado State University, where he studied with Conductor’s Guild past-president Wes Kenney. He also holds an undergraduate degree in Clarinet Performance from Transylvania University.