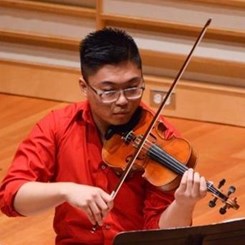 Get to know William W. Wang

Violinist William W. Wang was born in China and started learning the violin when he was 6 years old. After moving to Philadelphia in 2004 with his family, William studied with Irving Ludwig and Juliette Kang of the Philadelphia Orchestra. As an orchestral musician, William performed with the Philadelphia Youth Orchestra and Philadelphia Sinfonia. He has participated and led as concertmaster/associate in multiple festival orchestras such as Philadelphia All-City Orchestra, PMEA District, Region, and State Festival Orchestras. In 2013, William won the Philadelphia ACO Festival Concerto Competition and debuted in Verizon Hall of the Kimmel Center. He recently attended the Texas Music Festival in June of 2019 as an orchestral fellow and led the orchestra under the baton of Maestro Rossen Milanov.

In addition to his orchestral endeavors, he is also an avid chamber musician. Upon attending Peabody, William has worked with a number of musicians in a variety of instrumentations. After forming the Apollo String Quartet in 2017, William has attended the Castleman Quartet Program the three following summers, under the mentorship of world-renowned musicians and pedagogues. As manager and violinist, William performs frequently with Apollo String Quartet at various venues and events.

In his teachings, William has always strived for good communication. He believes that flexibility is the key to assuring success in each of his students. Every student is unique and William tailors his progression and teaching method to fit the student’s needs and goals.

Currently based in the DMV area, William studied with Qing Li, principal second violin of the Baltimore Symphony Orchestra, at the Peabody Institute of Johns Hopkins University.