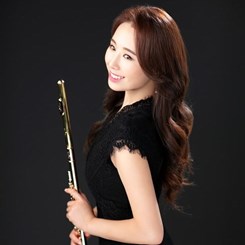 Get to know Yejin Lisa Choi

Flutist Lisa Choi completed her Bachelor of Music Degree at The Juilliard School, studying with Jeffrey Khaner. Ms. Choi has contributed her talent to many ensembles at Juilliard, performing in the Juilliard Orchestra, Chamber Orchestra, Opera, Wind Orchestra, and ChamberFest. Recently, Ms. Choi was one of the six finalists at the 2019 New York Flute Club Competition. Ms. Choi marked her Carnegie Hall debut in 2013 by winning Second Prize at American Protégé International Concerto Competition performing Carmen Fantasy for Flute. She also made her Kennedy Center debut in 2013 by winning Third Prize at Asian American Music Society performing Loeillet’s Trio-sonate in F Major. In 2016, she performed in Carnegie Hall again as the first prize winner at the Vivo International Music Competition. She also won first prize in Columbia Orchestra Young Artist Competition in Maryland and played Mozart Flute Concerto in D Major, K.314 with the Columbia Orchestra (MD) as a soloist in 2013. Conducted by Dr. Harlan Parker, Ms. Choi had recently played the Carmen Fantasy as soloist with the Centennial HIgh School Band at the Midwest Orchestra/Band Clinic in Chicago. In the 2018 Juilliard Opera production of “The Merry Wives of Windsor”, Ms. Choi was featured as the on-stage solo piccolo. Before her college years, she performed as a soloist with Peabody Youth Wind Orchestra, Maryland Howard County Gifted and Talented Orchestra, Centennial High School. Ms. Choi played Prokofiev’s “Peter and the Wolf” on stage with the Baltimore Symphony Orchestra in 2012. Her past summers were spent at the Aspen Music Festival and the National Orchestral Institute. She is currently completing her Master’s in Flute performance at Cincinnati Conservatory of Music under Demarre McGill.

Born in South Korea and raised in Ellicott City, Maryland, Ms. Choi began her musical studies on the piano at the age of seven. She began studying the flute at the age of ten. Ms. Choi was at Peabody Preparatory from 2009-2016 studying under Rachel Choe, and she participated in Peabody Youth Orchestra from 2010-2016. Aside from performing she also teaches a variety of students for flute and piano. She has been teaching since the age of 15 with her mom who is also a piano teacher. She designed her own student recital in 2019 at Bethel Korean Prebysterian Church where 8 of her students participated. When she is not playing musical instruments, Ms. Choi likes to volunteer as a mentor at her church and enjoys figure skating in winter.