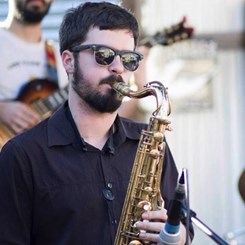 Get to know Zachary Evans

Zac Evans is a composer, saxophonist, and educator based out of Atlanta, GA. As a composer, Zac has had the opportunity to write for a diverse range of ensembles ranging from jazz big bands, to live hip-hop. He leads the hip-hop/jazz outfit “Monkier” which was named "Critic's Pick - Best Jazz Act 2016" in Creative Loafing Atlanta. Monkier has had the opportunity to open for some well known national acts such as Knower and Moonchild. Zac also co-leads the Rebel Big Band, a collective ensemble dedicated to original and progressive music for big band, which released their debut album in 2019. As a performer, Zac has had the opportunity to play with a wide variety of local artists and ensembles including the Georgia Symphony Orchestra, the Macon Pops, City Springs Theater Company, and many local original artists. Zac currently teaches saxophone and jazz history at GSU, Perimeter College and maintains an active private studio. He previously served as the Education Coordinator for the Georgia Symphony Orchestra from 2016-2018. Zac graduated Magna Cum Laude from Kennesaw State University with a Bachelor’s degree in Saxophone Performance, studying in the private studio of Sam Skelton. He was a 2014 recipient of the Jack Kent Cooke Foundation Graduate Arts award and attended the University of Texas at Austin, receiving his Master’s degree in Jazz Composition in 2016 and receiving the 2015 award for Outstanding Graduate Student.
Zachary Evans teaches at:
Snellville GA
1905 Scenic Highway Suite 610
Snellville, GA 30078
(770) 982-0822
Get Directions More Details
Skip link