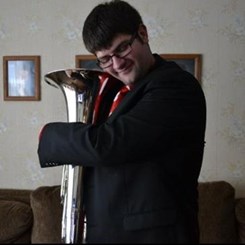 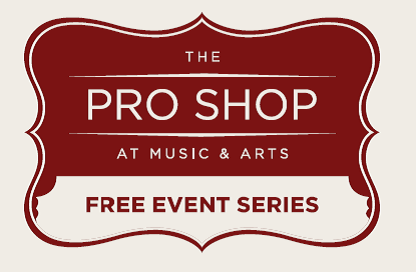 Last night the Itasca Pro shop had the privilege of hosting a world renowned master tuba player, Patrick Sheridan.  He is considered by many to be the most celebrated soloist in tuba history.  He has performed over 3,000 concerts in over 50 countries.  He has studied under many world famous Tuba players including Arnold Jacobs, former Principal Tuba player in the Chicago Symphony Orchestra, and Daniel Perantoni, presently the Tuba/Euphonium professor at the Jacobs School of music.  His career started off early with his involvement playing Tuba in the President Own Marine Band.  After this he took a break from the Tuba and started expanding his education.  He currently holds a Master of Business Administration degree with an emphasis on finance and marketing.  Now-a-days he continues to play the Tuba, present clinics, directs various honor bands and groups, authors method books and even helps design Tubas for Jupiter instruments; specifically the XO and the Quantum series. 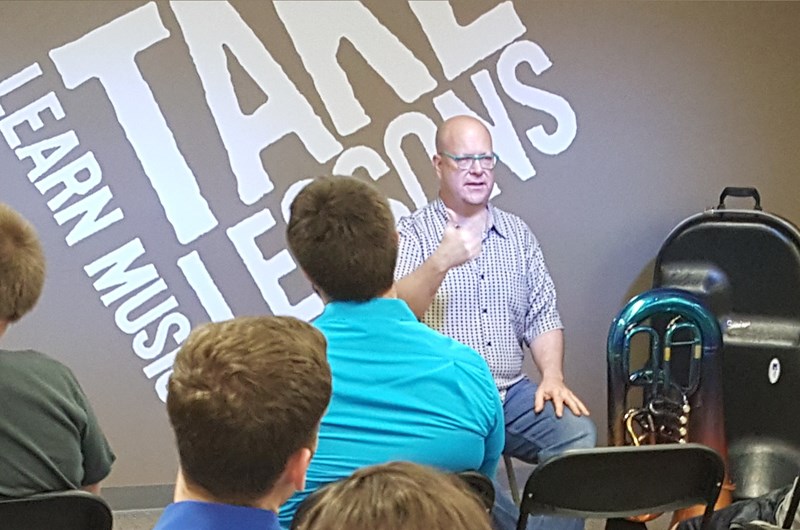 At the event yesterday, he talked about his life as a tuba player and also his practicing techniques. He says:

“Tension is the enemy of tone.  As players we need to be as relaxed as possible in order to produce the best quality of sound.”

He then demonstrated this sound quality by playing the tuba under muscle tension and without tension.  The sound difference was extremely noticeable.  Included in his practicing techniques is proper breathing.  He says:

“Breathing should sound and feel free.”

Breathing and tension go hand in hand.  They are both on the same team.  Patrick continued his discussion on breathing and tension while performing some wonderful exercises and music on his “Fruit Roll-up” Tuba.  He calls it this due to the Tubas’ distinct color of Red, Teal, Black, Yellow, and Gold.  It was very exciting to see this Tuba in person and it is interesting to know that Patrick helped design this Tuba for himself.

The clinic continued and he went into more practicing habits.  Patrick Sheridan emphasizes the importance of singing for brass playing.  In college, he had to join a choir before he could further his education on the Tuba. He learned that if a student can sing his music, then this student can play their music.  He emphasizes hearing what the music sounds like before playing.  After the entire discussion about his practicing techniques, we applied his techniques to our own playing.

Overall, this event was extremely successful. Patrick Sheridan told a lot of stories, shared a lot of laughs, and taught all of us important practicing techniques.  It was an honor to have such a wonderful, charismatic musician in our store.