Clearance
As Easy as Breathing 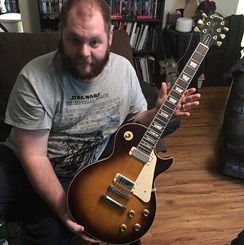 Ever watch one of your favorite artists perform and think to yourself, " How DO they do that?" It's easy to look at others and feel pretty unimpressed with our own playing. But it's good to remember that even the greatest players have these moments where they don't feel good enough.

When guitar titan Randy Rhodes was at the pique of his popularity thanks to his work on the album Blizzard of Ozz with Ozzy Osbourne, he often found himself directly in competition with Eddie Van Halen. Anyone who listens to both these players would clearly see Rhodes as the superior talent, but nevertheless he always felt outshined by his counterpart. The story goes that Randy went to a Van Halen concert with his girlfriend and upon seeing Eddie's playing told her that he had to leave, go home, and practice. Even though she tried hard to convince him that he was just as good or better, he insisted that he wasn't skilled enough and needed improvement. Just like all of us, he too felt inadequate at times and never stopped wanting to grow.

Any quick listen to Randy Rhodes' playing and one thing really stands out: it sounds natural. Often times, fast, technical, or complicated music can come off sounding forced or difficult. For me, the "how does he do that?" moment happens with Randy Rhodes when I listen to his solo on the mega-hit 'Crazy Train'. Even though I have learned and played that solo note for note many times, the effortless way that he pulls it off on the recording still astounds me. It gets even more bewildering when I realize that Randy was 22 years old when he recorded it and tragically died in a plane crash only two years later. I'm 26 and his genius amazes me.

The kicker to all of this is that there are two very different reactions we as musicians can have when we encounter musical prowess beyond our own. We can feel inadequate, beat down, and depressed OR we can do what Randy did. We can let that musicianship inspire us to work hard and get better. Randy Rhodes' love of the guitar spurred him to spend more time with the instrument than anything else, and the results can be heard in his playing. It sounds like the guitar is an extension of his body, and the lightning fast riffs are as easy as breathing. It's my goal for my playing to feel that natural, and whatever your goal may be it will always benefit from the example of someone better. I've always thought if you can't find someone who is better than you, you simply aren't looking hard enough!