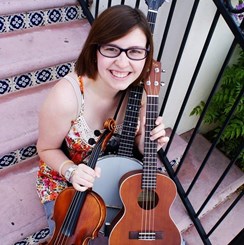 Open Mic Night is back again this month! And we are thrilled to announce that local performer and private instructor Stuart Oliver the Folk Guru will be jamming with us as well. Stuart Oliver is a multi-instrumentalist and professional songwriter whose accolades include Connor Christian & The Southern Gothic (Billboard Magazines “Best Bets” of 2012, #17 Billboard Country Charts February 2013).