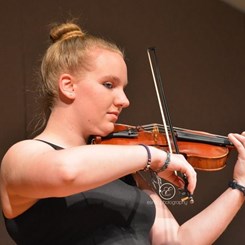 Dolly Rebecca Partonwas born in the small community of Little Pigeon River in Pittman Center, Tenn., and is the fourth of 12 children in a poor family. She describes her poverty and upbringing in some of her songs including “Coat of Many Colors” and “In the Good Old Days (When Times Were Bad).” She is an American singer, songwriter, multi-instrumentalist and much more, mainly known for her work in country music.

Parton started performing when she was a child, singing on local radio and television programs in East Tennessee. She appeared on radio shows and television, performing professionally at the age of 10. When she was 13, she recorded the single “Puppy Love” with Goldband Records and met Johnny Cash while making her debut at the Grand Ole Opry. There, Cash motivated her to follow her instincts in regard to her music. Parton gained popularity in 1967, around which time she partnered with Porter Wagoner. The two became a popular duo and recorded many country hit songs together including “Please Don’t Stop Loving Me” and “Just between You and Me.”