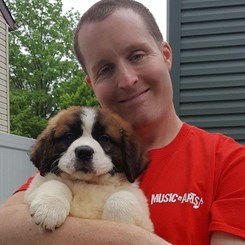 Instructor Jeremy Gilless Has Strung Together An Impressive Career

No matter what Jeremy Gilless is doing, the activity always comes with strings attached. Whether it was fiddling with the cello in third grade, playing the upright bass as a Severn River Middle student or finger-picking melodic flamenco tunes on one of his seven guitars as an adult, Gilless nurtured a passion for music, which is now his livelihood.

Today, Gilless is a revered instructor who works at Music & Arts shops in Severna Park and Ellicott City and at Bill’s Music in Catonsville. Between those spots, and during a stint as a teacher at Broadneck High School from 1999 to 2002, he has taught members of the Kelly Bell Band, Jimmie’s Chicken Shack and The Generics among others.

“Music has been the complete package,” Gilless said, looking back on his accomplishments. “It’s a great outlet. It’s very rewarding to see how music positively impacts lives.” The foundation for Gilless’ instrumental endeavors was established during youth.

Both of his parents were musicians. His mother was a pianist, his father played guitar, and any time Gilless needed something to do, he needed only to pick up one of the many instruments lying around the house. Gilless still remembers snagging Steely Dan records from his parents’ collection. It’s doubtful they ever got the albums back. “As a kid, my first favorite band was Rush,” recalled Gilless, who also grew fond of blues and jazz. “I was a fan of a lot of ‘70s music. And my parents were Yes fans. That’s where my influences came from.”

In school, Gilless was classmates with future members of Annapolis-based bands Swampcandy and the Rob Levit Trio, and Pasadena band Sweet Leda. After majoring in music education and classical guitar at Towson University, Gilless caught a big break. He was able to have some of work critiqued by Charlie Byrd, a guitarist known for his precision in bossa nova and jazz music.

Soon after, mutual friends put Gilless in touch with Casey Hean, a future member of Jimmie’s Chicken Shack, who at the time was seeking an instructor. Gilless has been teaching ever since. “I never thought about teaching before that,” said Gilless, who joined Music & Arts in 1999 as a salesman before shifting to instructor in 2002. “In a way, I owe everything to [Casey].”

Hein was not the only successful student taught by Gilless. Kelly Bell Band guitarist Ryan Fowler was a junior at Broadneck High when he took instruction from Gilless. Battle of the Bands winners Angelfire (2001) and No Capes (2015) also had members taught by Gilless. Jeff Packett, store manager of Bay Tunes Inc. in Edgewater, was one of Gilless’ earliest students. Packett said now, nearly 20 years later, he still refers to Gilless when he has guitar inquiries.

“Jeremy’s key to success is that he is able to adapt to any type of student,” Packett said. “We judge success by how long a student stays with their instructor – we call that the turn rate. And with Jeremy, there is a wait because his students want to keep learning with him. He has always been able to work with any level of musician and, maybe more importantly, any personality.”

Gilless also pegged flexibility as a reason for his success. “I keep notes on what every student is working on,” Gilless said. “The challenge is individuality. I find a three-way middle ground between what the student needs, what the student wants and what their strengths are.” When Gilless isn’t mentoring guitarists, he is performing solo acoustic shows or with several Maryland cover bands.

He is a substitute guitarist for classic rock and blues band Foreplay, he sometimes plays alongside the John Nichols Band, and he has been a member of Radio City, a special events band, since 2009. “I love that guy’s spirit, and his enthusiasm is infectious,” said Scott Hymes, singer and keyboard player for Radio City, which plays several annual events, including the Hospice of the Chesapeake gala. “In music, and almost every profession really, there can be a lot of complaining. But with Jeremy, there is no ego. Where some guys might say, ‘I don’t know that song, so I can’t play it,’ Jeremy will say, ‘I know a chorus and a verse, so let’s do it.’”

While Gilless has amassed respect from several peers, his biggest supporters are his family, whom he plays for regularly. His wife, Julie, loves Ottmar Liebert and classical music. Sons Justin and Jake enjoy Ed Sheeran, Fall Out Boy and Imagine Dragons.

Some of his upcoming shows include a gig with Foreplay at Molloy’s Irish Pub in Gambrills on November 7 and a solo performance at the Annapolis Greene Turtle on November 13.

To find more dates for live shows, visit the “Jeremy Gilless” Facebook page. “I’ve always been an extrovert, and I enjoy being around people,” Gilless said. “I couldn’t have asked for a more perfect setting. I feel very fortunate to have been able to make a living with this. It’s great to see so many of my students go so far with their guitar ambitions.”