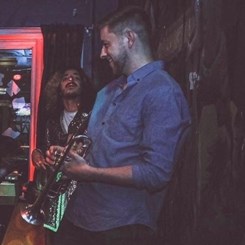 What are extended techniques? These are skills on your instrument that exceed normal expectations of its use.  In pursuit of specific sounds, performers need access to a wide range of extended techniques to suit the demands of composers or enhance their improvised solos.  Here are some examples and usages of such techniques in the brass family:

Circular breathing:  One of the hallmarks of brass (and wind instruments in general) is the requirement of air, and time to breathe while playing the instrument.  Circular breathing is a workaround of this problem, in which players can inhale through the nose while exhaling out of the mouth and into their instrument.  Barring fatigue, players could hypothetically play forever.  Here is an excellent example of trumpeter Rafael Mendez utilizing this technique in a piece originally written for violin, Moto Perpetuo.

Double and Triple Tonguing:  Multiple tonguing is the ability to articulate, or attack, notes at a faster speed than normal.  Brass players typically articulate notes by pressing the tongue against the top of the teeth, but this limits how quickly you can attack the next note.  With double tonguing, you strike the top of teeth and then immediately use your tongue to articulate from the top of the mouth.  A great example is Wynton Marsalis performing the finale of Carnival of Venice.

Flutter Tonguing:  Flutter tonguing, or growling (in certain contexts), is a technique used to add a rough edge to the tone of your instrument.  You blow through the instrument and articulate the same way you use the tongue to roll R’s, creating an aggressive growl.  It is used in orchestral contexts to add stress and strain to longer notes.  It is most common in jazz contexts, however, where the player often uses it in combination with a plunger mute to add a bluesy touch.  One of the earliest examples of this technique is Cootie Williams playing Duke Ellington’s Concerto for Cootie.

Split tones:  Split tones, or multiphonics, are an effect on brass instruments where you produce more than one pitch at the same time on the instrument.  Normally, the top and bottom lip vibrate at the same speed.  When they vibrate at different speeds, two pitches are produced.  It is a tricky skill to master, but an extremely impressive sound.  This example shows some wild multiphonics during a tuba solo.

These are just some of the limitless possibilities of extended techniques with brass instruments! Keep exploring or experiment yourself!