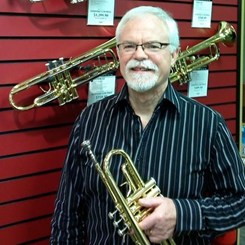 Get to know David T

Greetings!  My name is Dave Triplett, and I joined the Music & Arts team at the park in 2013, shortly after my wife, Kim, and I relocated to the state of Maryland.  I am actually a Virginia native and my hometown is the northeastern piedmont’s historic town of Culpeper.  I was born into a very musical family, as both of my parents sang in our church choir in addition to my dad’s talents on the tenor banjo and my mom’s love of the piano.  My siblings played clarinet, piano, trumpet, or trombone.  With all of this music going on, I was inspired to sing in our church youth choirs and started taking trumpet lessons in the fifth grade.  I have always loved all kinds of music, but as a teen, I became particularly interested in jazz and Louis Armstrong.  As a young adult, I later moved to Richmond and received further musical training at Virginia Commonwealth University and studied trumpet under Edward Mirr.  I soon toured professionally with several musical groups during the 1970’s and 1980’s, performing in 38 states and Canada.  I also performed with opening acts for various jazz artists including The Cannonball Adderley Quintet and Ray Charles.  During the 1990’s, I later became more of a freelance musician, performing with various artists including The Spinners and Martha Reeves & the Vandellas.  In addition, I taught a summer session of trumpet and trombone lessons within the Community Music Outreach Program for Virginia Commonwealth University, and was later a 2012 LPM graduate of the Leadership Program for Musicians based in the Richmond area.

These days, I continue to write, record, sing, and play my trumpet and flugelhorn at local churches, clubs, and various concert venues, in addition to serving the wonderful folks who come into Music & Arts for all of their musical needs.  I love entertaining, I love being entertained, and I love the sounds of music lessons going on all around the store.  Private lessons really are the basis for solid and structured musical achievement, and Music & Arts is the nation’s largest lesson provider.  As a lover of music, I look forward to meeting and assisting you, and exploring the possibilities in your musical journeys!