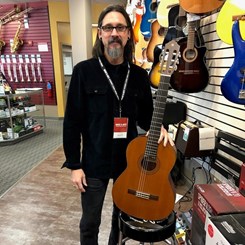 Get to know Josef M

Hi, my name is Scott. After graduating from Yale University in 1996 with a Master of Music in Guitar Performance, I moved down to Baltimore to pursue a second graduate degree. Shortly after arriving, I joined the faculty of the Peabody Preparatory and became the Guitar Department chair. In addition to teaching, I was a founding member of the 1 East Guitar Quartet. From 2001 to 2010, I had the pleasure of performing with the quartet at many guitar festivals and concert series. Our eponymous CD was released in November 2009.

In September 2019, I joined the sales team at Music & Arts in Severna Park, MD. I look forward to assisting you in finding what you are looking for to help you realize your musical goals.