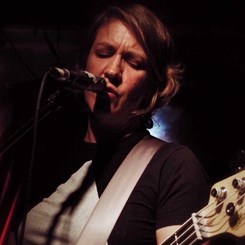 Get to know Ariana Patterson

My path to Music & Arts is a great story! I’m a self-taught indie rock musician from Baltimore, who grew up overseas, the daughter of a foreign service officer. The DC area was our home-base, but I’ve lived all over; born in Afghanistan, I lived in Rwanda, Zambia, Egypt, New York City, Virginia, and Connecticut.

I ended up in Baltimore in my early twenties, playing in bands and chasing the dream. My husband and I met at a gig in Wheaton, Maryland, and two kids and 10 years later, started our own music store. We were living the dream, just a little different from what we imagined! My wide variety of retail, customer service and administrative job experiences throughout my life, as well as background in graphic design, marketing and promotion, uniquely prepared me for the role of music store owner, and twelve years of that pursuit laid the foundation for my new career, first as store manager in Olney, now the new manager in Germantown! You could say I finally got signed to a ‘major label’!

As a kid, I was an artist. Obsessed and talented. Cut to college, when everything changed. My drive to draw and create, my visual muse left me, like writer’s block. Enter a bunch of guitar-playing roommates in a town full of musicians, BOOM. New muse. Learning to play guitar so I could write my own songs became my new obsession. I met folks who heard my stuff, encouraged me, and before I knew it, I was playing Open Mic nights and getting asked to join peoples bands. For 7 years, I played bars and clubs from North Carolina to New York City, at the Inner Harbor and Artscape festival in Baltimore, the Philadelphia Music Conference, among some of the highlights.

I’m an accidental musician. I grew up listening to my dad blaring big band music on Sunday mornings to wake us up, to my big sister’s Joni Mitchell records and my brother’s Rolling Stones. I practiced harmonizing with my little sister, singing along to The Carpenters, the Supremes, The Cowsills. I taught myself how to play guitar so I could write songs. Sharing those songs with others lead me to the magical world of being in a rock band, of creating original music with other highly creative musical artists and playing it LOUD for fans of that sort of thing. What a rush! What an incredible feeling, playing music with other passionate people! I want everyone to experience the joy of playing music.

As a business owner in the Olney community for more than 12 years, I had the privilege of watching kids and adults alike, grow in their musical practice and skill, go off to college and on to careers in music many of them (some even coming back to teach in our store!), of helping adult players and kids network to join bands as part of our Jam Groups program, of putting on countless events big and small to share the gospel of live music. Join us! Rock on!