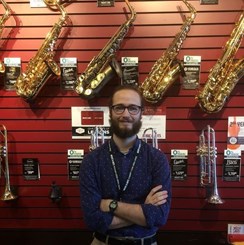 Get to know Zakaree B

Hey guys! My name is Zak and I've been a part of the Music and Arts team at Midlothian since the summer of 2010 and became the store manager at the begining of February, 2016. I started playing music as a double bass player in my middle school orchestra class and continued through high school playing in many extracurricular orchestras around the area such as CRO, All State and RYSO. During my grade school years, I also played electric bass in a few bands ranging in genres from indie-rock to metal. Curently, I play both guitar and bass in a couple of bands in the Richmond area and have had the oppertunity to be able to do a bit of small time touring!

Should you ever need anything musical, don't hesitate to give the store a call or swing by! I'll be more than happy to assist you with anything you need!