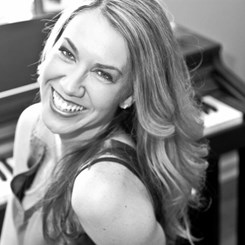 Enter quote..."There is a vitality, a life force, an energy, a quickening that is translated through you into action, and because there is only one of you in all of time, this expression is unique. And if you block it, it will never exist through any other medium and it will be lost." Martha Graham

Kasey McCormick-Melberg is a performer and educator in the Nashville area.  Originally from Indiana, Kasey is graduate of Butler University’s Jordan College of the Arts with a Bachelor of Arts in Vocal Performance.  A dynamic performer, Kasey is well versed in many styles of music which include classical, jazz, musical theater, and pop.  Shortly after moving to Nashville, Kasey and her two sisters teamed up with the independent record label Banner Records, and as the act Trilogy, performed in New York’s Central Park and sang the national anthem at many Major League Baseball parks in the Midwest. Kasey continued her musical journey on a variety of paths.  She was the lead vocalist for a prestigious twenty-three member orchestra based in Nashville, who’s repertoire included classic big band styles of the 1930’s and 40’s Swing era, as well as pop, R & B, and film music.  Since 2010, Kasey has been performing and touring with the band Pink Cadillac, and in 2013 she and the band had their best year ever playing a 9 city tour for TD Bank’s WOW Awards Show, opening at New York City’s historic Beacon Theater and continuing up and down the East coast from Boston to Washington, DC.  Kasey has served as cantor and choir member for the Downtown Presbyterian Church in Nashville, the Church of the Advent Episcopal in Brentwood, TN, and as a guest soloist at many churches in the mid-Tennessee area. Kasey has been a vocal and piano instructor since 2004, teaching private students, serving on the faculty at Allegro School of Music, as well as Siegel High School in Murfreesboro, TN.  She has prepared many students for further studies in music at colleges and universities throughout the United States, as well as those choosing a career in the performing arts.