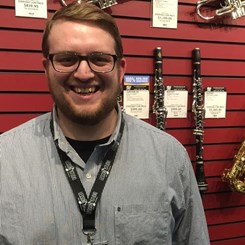 Derek Brown - "BEATBoX Sax"
From his 7 million views on Youtube to his interviews on international television and NPR's Weekend Edition, Billboard-charting saxophonist/innovator Derek Brown and his solo "BEATBoX SAX" project has been exploding across the music scene.
As described by jazz journalist/historian Scott Yanow, "Brown performs his unaccompanied solos that occasionally make one recall Bobby Mcferrin in his earl prime and the great saxophonist Eddie Harris... utilizing slap-tonguing, circular breathing, a wide interest in musical styles and dazzling coordination to create a rather unique music"
Previously the director of jazz studies at Abilene Christian University for six years, Derek now lives nand performs in Chicago, paying in various bands and projects around the area and throughout the world. His recent "BEATBoX SAX" music tutorials on YouTube have been very popular among saxophonists and music loves alike, leading to endorsements with Leere, JodyJazz, P.Mauriat, BG, and ADK. Derek has performed solo concerts throughout Chine, Russia, Japan, Germany, France, Poland, UK, Norway, Finland, Malaysia, Latvia, Serbia, Isreal, Ukraine, Czech republic, Bulgaria, Brazil, Dubai, as well as throughout the U.S.
Derek received his BM in Music Performance (Classical and Jazz) from Hope College in 2006 and his MM in Jazz studies at the university of Cincinnati, College-Conservatory of Music in 2008.
Crossing genres from jazz to classical to funk, saxophone innovator Derek Brown's unique playing style must be seen to be believed!
The Music & Arts team at Fox Valley is ecstatic to welcome Derek Brown to our store on Tuesday May 8th for an in-store clinic and short performance! This clinic is free and open to the public, and it is an opportunity that you simply cannot miss as Derek Brown is one of the most unique, genre-bending voices in music today. If you have any doubts, check this out:
https://www.youtube.com/watch?v=23I8OtXCs3o
To RSVP to this clinic please call (630) 585-0223
See All Blog Entries