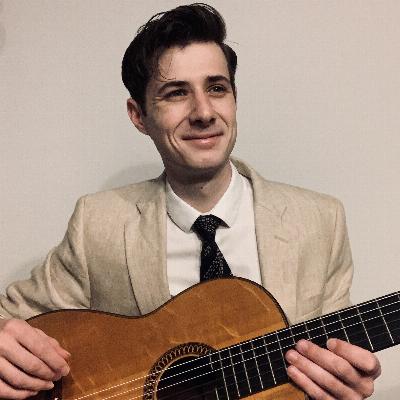 Alec Feldges
Music Teacher, Master
Location: Muskego, WI
Speaks: English
Instructs: Bass Guitar, Guitar
Education: Master is Music, Guitar Performance, McGill University
Performance Experience: Alec has performed Internationally both as a solo artist and in group ensembles and is a winner of the 2016 University of Missouri Emerging Artist Competition.
Teaching Experience: Alec has 10 years of teaching experience, from one-on-one private guitar instruction, group lessons, to teaching general music in public schools
Teaching Philosophy: Everyone has their own path to music. It is my job to help you discover it.
Book Now

Get to know Alec Feldges

A winner of the 2016 MU Emerging Artist Competition, Alec has performed solo concerts all over the world including the U.S., Canada, and Europe. He gave his international debut in 2015 when he was invited to perform and give master-classes as a guest artist at the Zobel Gitarrenschule in Bad Nauheim Germany and his performance at The Benton Club in St. Joseph Missouri was critically acclaimed to be “a highlight of the concert season, [and] a resounding success” (President, Missouri Music Hall of Fame).

Alec received his Bachelor in Music from the University of Missouri where he attended as an Evans Scholar and studied under Anthony Glise. He completed his Masters in Guitar Performance from McGill University in Montreal, QC, where he studied with world-renowned guitarist Jerome Ducharme. Additionally, throughout his formal years, Alec has attended and performed in countless master-classes where he took lessons from some of the world’s leading guitarists including David Russell, Jason Vieaux, David Leisner, Jorge Morel, and Martha Masters. A dedicated teacher, Alec has accumulated over 6 years of experience both as a school teacher, and a private guitar instructor. Teaching students of all ages and skill levels, Alec is devoted to bringing inspiration to all his students through sharing his knowledge and love of music.