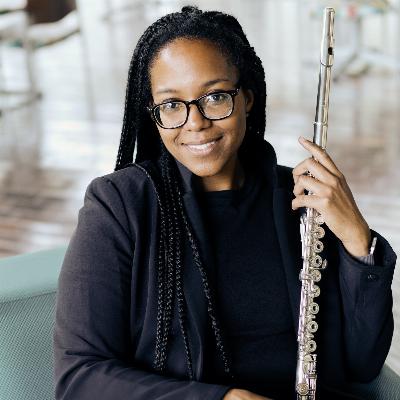 Get to know Anna

Anna Wilkens-Reed is a flutist based in St. Louis, MO and Memphis TN.

Originally hailing from Memphis, Tennessee, Anna began her music lessons at age five after becoming enraptured by the flute solos during a performance of the Magic Flute.

She has also performed in various masterclasses for Valerie Coleman, Wissam Boustany, Stephanie Winker, Alexa Still, and Paula Robison. After relocating to Germany in 2012, Mrs. Wilkens-Reed studied with Stephanie Winker of HfMDK Frankfurt while serving as the assistant principal flute of the Westpfälzisches Symphonieorchester in the Rheinland-Pfalz region. Mrs. Wilkens-Reed is especially dedicated to mentoring younger musicians and finds joy in helping her students reach their own personal goals in music. She particularly enjoys chamber music coaching and woodwind pedagogy classes with beginning and intermediate students.

Anna is an advocate of new music and enjoys commissioning or collaborating with composers on new works for flute and other mixed chamber ensembles.  In 2019, Mrs. Wilkens-Reed founded the Achelois Collective, a contemporary chamber ensemble dedicated to community engaged performance art and promoting works by queer, indigenous, female and underrepresented minority composers.

Anna holds a degree in Performance from the University of Memphis (B.M.) where she studied with Bruce Erskine. When Anna is not playing the flute, you can usually find her hiking, studying holistic methods for performance preparation, watching food documentaries or behind a pottery wheel.

Anna teaches at:
Fairview Heights IL
10 Lincoln Hwy Suite 102-B
Fairview Heights, IL 62208
(618) 622-1726
Get Directions More Details
Skip link
With over 150 locations nationwide, Music & Arts is the nation’s leading provider of private music lessons, band and orchestra instrument sales, rentals and repairs. Our remarkable story of growth has everything to do with the countless unshakable relationships we’ve formed with students, parents, music educators and musicians of every stripe in the local communities we serve across the country. Since opening our first store back in 1952, we’ve been owned and operated by the same family, and there’s nothing we do as a company without our values in mind. For whatever you’re doing in music, we’re here to help. We hope you visit our Fairview Heights location soon! Our friendly staff can’t wait to meet you.