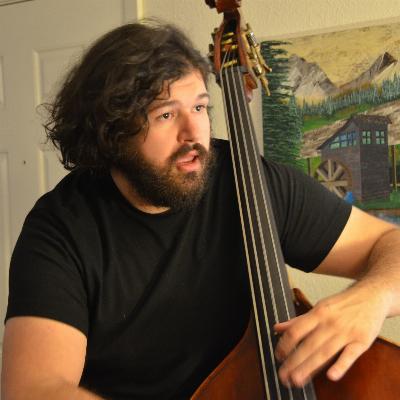 Get to know Anthony Casolari

Anthony was born August 7th, 1995. He is a South Florida native who moved to Denton to start school at UNT in the fall of 2019. He is currently in his last year of his undergraduate degree, but is planning on pursuing a master’s degree in future. While at UNT he studied privately with Lynn Seaton, and Gudrun Raschen. He performed with various lab bands, jazz small groups, and the Concert Orchestra. Prior to attending UNT, Anthony studied with Rodney Jordan at Florida State University, where he played in various ensembles and the University Philharmonia. He currently works as a freelance bassist in the DFW area where performs a wide variety of music including : Jazz, Blues, Rock/Metal, Pop, Funk, Latin, Classical/Orchestral, and more.

Throughout his performing career, he has had the opportunity to play and perform with the likes of Ira Sullivan, Dr. Lonnie Smith, Rich DeRosa, Alex Darqui, Ludwig Afonso, Billy Ross, Leon Anderson, Bill Kennedy, David Detweiler, Jason Hainsworth, and many more. He also had the opportunity to play section bass for the debut performance of Richard DeRosa’s “Life in Poetry and Music” featuring Kurt Elling in March of 2022.

Anthony Casolari teaches at:
Lewisville TX
360 E FM 3040 Suite 820
Lewisville, TX 75067
(972) 315-8400
Get Directions More Details
Skip link
With over 150 locations nationwide, Music & Arts is the nation’s leading provider of private music lessons, band and orchestra instrument sales, rentals and repairs. Our remarkable story of growth has everything to do with the countless unshakable relationships we’ve formed with students, parents, music educators and musicians of every stripe in the local communities we serve across the country. Since opening our first store back in 1952, we’ve been owned and operated by the same family, and there’s nothing we do as a company without our values in mind. For whatever you’re doing in music, we’re here to help. We hope you visit our Lewisville location soon! Our friendly staff can’t wait to meet you.