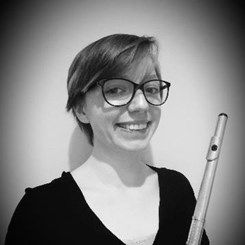 Get to know Caitlin Richards

Caitlin Richards was born in Northeast Ohio where her love for the flute began at a young age. Ever since she was three years old, she  knew that she would be playing flute for the rest of her life. At the age of 11, Richards began her studies. Throughout high school, she participated in the marching band, symphonic band, and various solo/ ensemble competitions. When Richards graduated high school, she studied at Kent State University, where her focus became flute performance. There she performed many studio, solo, and flute quartet recitals. Alongside her solo and chamber groups she also participated in groups such as the wind ensemble, symphony band, and new music ensemble. Now, with over thirteen years of playing experience, she wants to pass on her knowledge and love for the flute