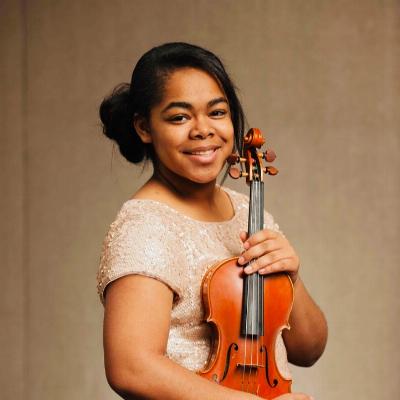 Get to know Carissa Powe

Carissa Powe, An avid soloist, chamber musician, and music educator is currently pursuing her Bachelor's degree in Violin Performance at the University of Arizona under Professor Timothy Kantor.

Carissa had received numerous awards locally and nationally, and made her solo orchestral debut at the age of 12 with the Tucson Symphony Orchestra. She has performed numerous times with the Civic Orchestra of Tucson, the Arizona Symphonic Winds, the Tucson Symphony Orchestra, and others. She was the string division winner of the Fred Fox School of Music's Concerto Competition in the Spring of 2021 and also won first place in the Solo String competition that year.

Carissa was selected for the inaugural season of Carnegie Hall's NYO2 and was a semi-finalist in the 20th Annual Sphinx Competition. Last fall, Arizona Arts Live featured her has a soloist as part of their at-home series in Centennial Hall. Carissa has participated in masterclasses with Martin Beaver, Elena Urioste, Paul Kantor, and Vadim Guzman.

She enjoys playing chamber music and plays in a string trio with her brother and sister, They have received multiple awards and performed for many organizations and fundraisers such as the Mayor's Council (city of Tucson), Raytheon, The Academy of Cancer Wellness, and also opened for the Harlem Gospel Choir with the Gospel Music of America Tucson Chapter.

She has taught private and group violin lessons for over 6 years, including being a private violin teacher for Quest for Education and Arts, String Project of the University of Arizona and a violin mentor for Sahuaro High School.

Carissa Powe teaches at:
East Tucson AZ
9630 E 22nd St Suite 130
Tucson, AZ 85748
(520) 731-8229
Get Directions More Details
Skip link
With over 150 locations nationwide, Music & Arts is the nation’s leading provider of private music lessons, band and orchestra instrument sales, rentals and repairs. Our remarkable story of growth has everything to do with the countless unshakable relationships we’ve formed with students, parents, music educators and musicians of every stripe in the local communities we serve across the country. Since opening our first store back in 1952, we’ve been owned and operated by the same family, and there’s nothing we do as a company without our values in mind. For whatever you’re doing in music, we’re here to help. We hope you visit our Tucson location soon! Our friendly staff can’t wait to meet you.