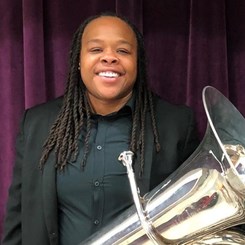 Get to know Casie Forbes

Casie R. Forbes is a native of Rocky Mount, North Carolina. She moved to Georgia in 2018.  She began teaching at Music and Arts in July of 2019. Before coming to Marietta, GA, Mrs. Forbes was one of the Assistant Band Directors at Central Lafourche High School in Raceland, LA. Her duties include conducting the Symphonic Band, and assisting with the marching band, winter percussion, winter guard, symphonic winds, and indoor winds.
She began teaching in Lafourche Parish in 2009. While in Lafourche Parish, Mrs. Forbes has been called upon to conduct the Thibodaux High School Concert Band, the Central Lafourche High School Symphonic Band Concert Band and the East/West Thibodaux Combined Middle School Bands. Each of these groups received the Sweepstakes Award at the L.M.E.A. State Festival.

Mrs. Forbes also was an adjunct member of the music faculty at Nicholls State University in Thibodaux from 2011 through 2012 where she taught the low brass students. Prior to teaching in Lafourche Parish, Mrs. Forbes was the Assistant Director of Bands at Fontainebleau High School in Mandeville, Louisiana from 2006 through 2009. Her duties there included conducting the symphonic band, and assisting with the marching band, winter percussion, winter guard, jazz ensemble and wind symphony. Before taking this position, Mrs. Forbes was the tuba and euphonium instructor at Southeastern Louisiana University in Hammond, Louisiana. In addition to her position there, she was also the music director at St. John Catholic School in Plaquemine, Louisiana where she conducted the school’s band and instrumental music program. Mrs. Forbes holds a Master of Music degree in tuba performance from Louisiana State University and a Bachelor’s Degree in music performance from Western Carolina University in Cullowhee, North Carolina.