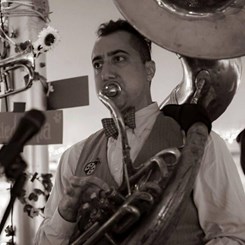 Get to know Daniel Nosheny

Dan Nosheny has been performing across a wide array of genres and styles for over two decades. A highly sought multi-instrumentalist in the Philadelphia music scene, he has been featured on sousaphone, accordion, and baritone horn with the West Philadelphia Orchestra, on sousaphone with The Asphalt Orchestra, and on trombone/tuba/accordion with Cuban master percussionist Francois Zayas. He is a graduate of the Eastman School of Music, and his projects blend traditional jazz styles with avant-garde and pop culture elements in whimsical, dreamlike, and downright funky combos. Dan has performed with Christian McBride, McCoy Tyner, and Laurie Anderson, and has been a featured performed with the Violent Femmes since 1999. In 2013 Dan founded Polkadelphia, a funky "polka chic" band comprised of some of the top talent in Philadelphia, and has taken Oktoberfests by storm up and down the east coast. In 2018 he was featured as part of the Mysterious Traveler series at the Philadelphia Free Library, in which he presented and performed a program of original music as an homage to the different rooms of the library.

Dan teaches all brass instruments as well as accordion and keyboards. His goal is to help students find music that appeals to them and help them master it, all within the confines of a low-pressure fun environment. He regularly transcribes music for his students to supplement method books and brass fundamentals and strives to make his students well-rounded musically charged individuals.