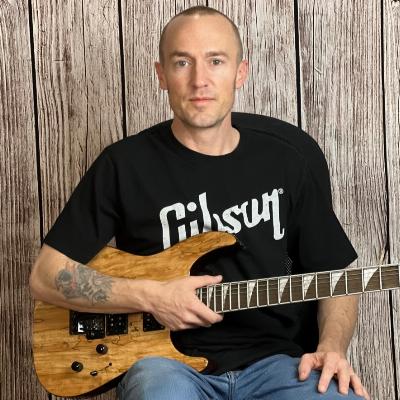 Get to know Derek Roland

Derek has been avidly playing guitar for 27 years - along with bass on the side for 15 years. Derek studied rock performance at the Atlanta Insitute of Music and undergraduate studies in Jazz Guitar at the University of Akron.

Teaching professionally for 20 years, he is a full-time instructor for one-on-one and group lessons. He was the owner of Falls Music Academy in Ohio. He has taught private lessons, small group and rock ensemble bands in Cleveland, Akron, and Columbus as well as abroad. He also directs student recitals around the area routinely.

He spent 10 years in Asia-teaching and performing guitar in Killing Fields, along with a mix of styles like rock, blues and metal with local ethnic bands. The exposure to a vast multitude of ethnic styles  greatly broadened his musical palette. He learned to teach guitar in Thai as a second language.

Teaching and performing are a passion of Derek's- from beginner through to advanced; for the aspiring child to adult. Theory is taught along the way with skills to arrange, compose and learn one's own voice along with emulating our favorite artists.

Derek loves spending time playing out on weekend gigs around Columbus and Cleveland, and arranging current new material to be released in the modern metal genre. New YouTube channel in the making on modern guitar playing. What Derek offers to you is a formula with a process; making attainable mini-goals with focused practice for results, and how to do that each step of the way.