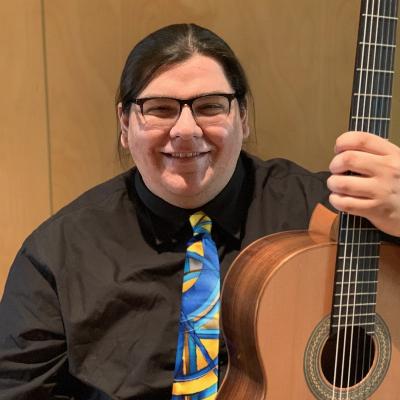 Get to know Emilio Garcia

Mr. Garcia has appeared solo in concerts, and as a chamber musician, most recently as a member of the Inaugural Virtual Guitar Orchestra to raise money for Doctors without Borders during the COVID19 Pandemic. His performance’s have garnered awards such as the Louis A. Armstrong Jazz Award, 2nd place at the OCC performance competition, and various other scholarships for excellence in performance and musicianship.

Emilio Garcia holds an A.A.S degree in Music from Onondaga Community College where he was instructed by renowned classical guitarist Kenneth Meyer, and a B.M. and M.M in music performance from the State University of New York at Fredonia under the instruction of guitarist Evan Drummond where he also was a member of one of the university’s flagship touring ensembles, The Fredonia Guitar Quartet.

Mr. Garcia currently has a thriving studio of private classical guitar students alongside recently being accepted to the D.M.A. program at the University of Hartford.

Emilio Garcia teaches at:
West Hartford CT
989 Farmington Ave
West Hartford, CT 06107
(860) 231-9562
Get Directions More Details
Skip link
With over 150 locations nationwide, Music & Arts is the nation’s leading provider of private music lessons, band and orchestra instrument sales, rentals and repairs. Our remarkable story of growth has everything to do with the countless unshakable relationships we’ve formed with students, parents, music educators and musicians of every stripe in the local communities we serve across the country. Since opening our first store back in 1952, we’ve been owned and operated by the same family, and there’s nothing we do as a company without our values in mind. For whatever you’re doing in music, we’re here to help. We hope you visit our West Hartford location soon! Our friendly staff can’t wait to meet you.