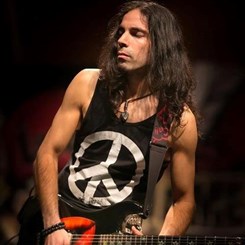 Get to know Ethan Brosh

Ethan Brosh is one of the most premier rock guitar players today. Having toured and recorded with some of the greatest rock musicians in history such as Yngwie Malmsteen, George Lynch, Dave Ellefson, Greg Howe, Jake E. Lee, Michael Schenker, Uli Roth, Pat Travers, Eric Martin (Mr. Big), Carmine Appice and the list goes on and on, Ethan is securing his place as one of the legitimate high quality high energy guitar players out there. A Berklee alumni with a degree in songwriting and a part time guitar instructor at the college while off the road, Ethan had played guitar for the band SteelHeart and is now the lead guitar player for Fifth Angel and a lead guitar player for Michael Sweet (The voice of Stryper). Ethan has put out 3 highly produced solo records of Hard Rock Guitar Instrumentals and continues to tour with The Ethan Brosh Band in support of his original music.
Ethan Brosh teaches at:
Newton
839 Beacon Street
Newton Centre, MA 02459
(617) 332-3578
Get Directions More Details
Skip link