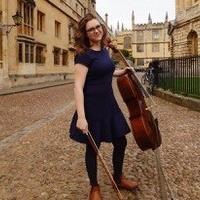 Get to know Evangeline Prior

Evangeline Prior has been working as a Piano, Cello, and Voice teacher with Music & Arts Glendora for almost two years. After beginning piano lessons with her father as a young child, she began to take classical piano and voice lessons in middle school and began cello lessons in high school. By her senior year of high school, Prior had played cello with the Inland Valley Symphony for two years, competed in the Inland Empire Piano Competition and The Temecula Rotary Club Competition, and received recognition for completing the MTAC Advanced Certificate of Merit level with Branch Honors in both piano and voice. She also prepared and produced her own high school senior recital, featuring solos her three main instruments. She was accepted into Azusa Pacific University as a triple major in Pre-Teacher Certification, Cello Performance, and Honors Humanities. During her time at APU, she has toured internationally with the APU Chamber Singers, coached strings classes for schools in the Glendora Unified School District, served as a music director for the Liturgical Chapel Band, and studied music history at Oxford University. Outside of APU activities, Prior has also worked as a Musical Director for CYT Riverside, served on worship teams for churches across Southern California, and participated in national church conferences. Currently, she is finishing her M.A. Ed. and Music Credential at APU as well as teaching distance learning music in Yucaipa.
Evangeline Prior teaches at:
Glendora CA
848 South Grand Avenue
Glendora, CA 91740
(626) 963-0263
Get Directions More Details
Skip link