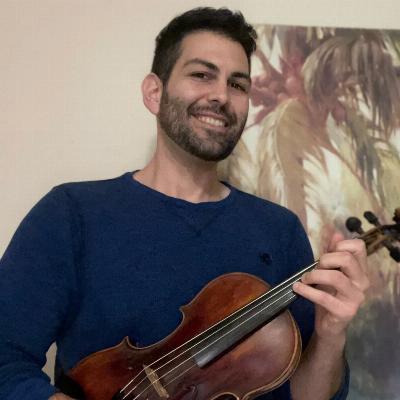 Get to know Greg Nyberg

Gregory Nyberg is from Miami, Florida, and has been teaching violin privately since 2005. After performing with the Florida High School All-State Orchestra and a tour of Europe with the United States Youth Ensembles, Gregory attended Florida International University for Violin Performance in 2006-2008. During this time, he performed with the Boca Raton Philharmonic Symphonia, the Hollywood Symphony and the Kletzmer Company Orchestra, and attended Interharmony Music Festival as a student, among other small-ensemble and chamber music concerts.After an enlistment in the Marines, Gregory decided to come back to what he knows and loves most; music. For the first half of 2021, Gregory returned home and taught where he took his first lessons, at Miami Music Works. For a year and a half Gregory taught at Music & Arts in Springfield and Woodbridge, Virginia. Gregory has settled in Colorado at the beginning of 2023 and studies Music Education at University of Colorado, Boulder. (Instrumental)

Greg Nyberg teaches at:
Springfield VA
6418 Springfield Plz
Springfield, VA 22150
(703) 451-0875
Get Directions More Details
Westminster CO
7350 West 88th Ave Suite B
Westminster, CO 80021
(303) 427-0601
Get Directions More Details
Skip link
With over 150 locations nationwide, Music & Arts is the nation’s leading provider of private music lessons, band and orchestra instrument sales, rentals and repairs. Our remarkable story of growth has everything to do with the countless unshakable relationships we’ve formed with students, parents, music educators and musicians of every stripe in the local communities we serve across the country. Since opening our first store back in 1952, we’ve been owned and operated by the same family, and there’s nothing we do as a company without our values in mind. For whatever you’re doing in music, we’re here to help. We hope you visit our Westminster location soon! Our friendly staff can’t wait to meet you.