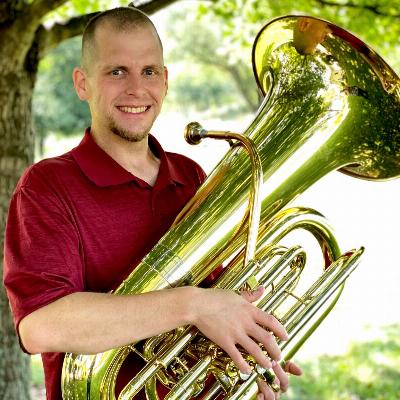 James Green
Music Teacher, Master
Location: COLUMBUS, OH
Speaks: English
Instructs: Baritone, Trombone, Tuba
Education: Doctor of Musical Arts in Tuba Performance--The Ohio State University Master of Music in Tuba Performance--Miami University Bachelor of Arts in Music--Abilene Christian University
Performance Experience: I perform solo recitals at several universities and tuba-euphonium conferences across the United States. I also perform with Polaris Brass and have a substantial amount of brass quintet experience along with New Orleans Style Brass Band experience. I am an associate musician at the Columbus Symphony Orchestra and am a substitute musician for the Lima Symphony Orchestra and Springfield Symphony. I have also performed with the Newark-Granville Symphony Orchestra and the Clermont Philharmonic.
Teaching Experience: I have been teaching privately for 18 years. I am currentlythe low brass professor at both Ohio Northern University and Ohio Christian University.
Teaching Philosophy: As a student of Roger Rocco and the Arnold Jacobs teaching philosophy, my basic approach is to have students learn through the production and refinement of sound and musical based approaches instead of the common physical based approach. My approach is also Socratic in nature by asking questions to help engage student critical thinking to find the answers in their playing and musical growth by leading questions and strengthening musical and technical awareness.
Book Now

Get to know James Green

As a proponent of new compositions and arrangements for the tuba, Dr. Green recently led a consortium of tubists to commission Ben McMillan’s Tomes of Redemption for tuba and fixed electronics. Dr. Green has also participated in consortiums and premieres of music of James Grant, Frank Gulino, Brooke Pierson, and Timothy Olt. Dr. Green frequently reviews new works in the “New Materials” section of the International Tuba Euphonium Association Journal, and has his arrangements published through Cimarron Music Press.

One of Dr. Green’s research focuses is on the use of the tuba in Russia. His doctoral document “ The History and Usage of the Tuba in Russia” was selected as a finalist for the Clifford Bevan Research award. He plans on doing further research on this topic in Russia. In addition, he has recently started a personal endeavor in healthier living utilizing weight loss and exercise and how it effects brass playing.